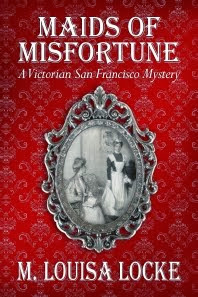 Book Description: It's the summer of 1879, and Annie Fuller, a young San Francisco widow, is in trouble. Annie's husband squandered her fortune before committing suicide five years earlier, and one of his creditors is now threatening to take the boardinghouse she owns to pay off a debt. Annie Fuller also has a secret. She supplements her income by giving domestic and business advice as Madam Sibyl, one of San Francisco's most exclusive clairvoyants, and one of Madam Sibyl's clients, Matthew Voss, has died. The police believe his death was suicide brought upon by bankruptcy, but Annie believes Voss has been murdered and that his assets have been stolen. Nate Dawson has a problem. As the Voss family lawyer, he would love to believe that Matthew Voss didn't leave his grieving family destitute. But that would mean working with Annie Fuller, a woman who alternatively attracts and infuriates him as she shatters every notion he ever had of proper ladylike behavior. Sparks fly as Anne and Nate pursue the truth about the murder of Matthew Voss in this light-hearted historical mystery set in the foggy gas-lit world of Victorian San Francisco.
--

Annie scanned the room again and thought with a sigh that the only place left to look was the bookshelves, and that could take all night. She leaned over to look at the clock she had noticed on the desk and almost let out a gasp when she saw the hands at 4:30. No, that can’t be right, she thought, not that much time has passed. Then she realized that the clock was silent, probably hadn’t been wound since Saturday. So what time was it? No more than fifteen minutes could have passed since she entered the room. She stood and listened carefully, but could hear only the sound of her own breathing. Well, she thought, I should at least look closely enough to see if it looks like any papers have been stuffed between any of the books.

Annie crossed over to the end of the shelves to the right of the door and had just raised the candle up high to get a better look at the top shelves when a soft sound at the door gave her barely enough warning to snatch the candle down and snuff out its flame. The door was shoved open to its full extent, effectively boxing her into a tight triangle, with her back against the wall, the bookshelves to her left and the door a few inches from her nose. Annie held her breath and hoped that the candle, which she held clutched to her breast, didn’t have enough heat left in the wick to set her robe on fire. Clearly whoever had entered the room had their own candle, since flashes of light cut through the edges of the door against the bookshelves and then jerkily stabbed through the long opening between the door and the doorframe. She slowly turned her head to the right so she could look over her shoulder through this opening. She was so relieved not to see an eye peering through the door hinge at her that she almost let out a sigh. Instead all she could see was a narrow strip of the end of the book shelves on the other side of the door, but the concen- trated brightness of the candle light indicated that the person who had entered that room was standing right next to those shelves.

There was a light click, and then a sound of wood sliding against wood. A small rustling noise was followed by the sliding wood
--

For over twenty years, M. Louisa Locke was known by students taking U.S. History classes at San Diego Mesa College as Dr. Locke, an enthusiastic and amusing teller of stories about the past. Now semi-retired, she has taken her story telling in a new direction with the publication of Maids of Misfortune. She is currently living in San Diego with her husband and assorted animals, where she is working on Uneasy Spirits, the next installment of her series of historical mysteries set in Victorian San Francisco.

If you would like The Podpeople to feature your Page 99, send us an email to: podpeep at gmail dot com with the subject line Page 99. Please include a link to your preferred e-commerce site, a cover jpeg, and paste your page 99 into the body of the email or attach it as a .TXT file. If your page 99 happens to be a chapter start or chapter end and does not contain a full page, you may use the full page before or after your page 99. One page only please.
Posted by Cheryl Anne Gardner at 1:00 AM
Labels: Page99

I love mystery stories especially historical ones. I have read almost all Agatha Christie's mystery books published. I may buy this one also.