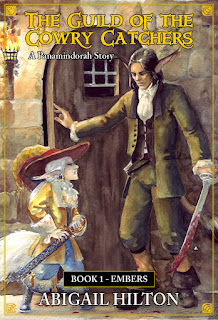 At least in my case, making the first book in the series free was an effective strategy for Abigail Hilton. I picked up this book up on a whim. I started off feeling quit indifferent about it. This fantasy world of talking beasts and fauns of various species is very 'kill and/or be killed'. You have to reconcile yourself with protagonists who torture, kill, or allow people to die often and for morally ambiguous reasons.

That said, the story grew on me very quickly. The hero is dropped in the middle of a supernatural and political web with a degree of subtlety and malice that he seems ill-equipped to deal with. The main thrust of the story is the search for the home base of a rebel group that challenges the tyranny of the grishnards (gryphon fauns) over the other species, the lowest of which are enslaved, hunted, eaten and their hides are even worn as clothing).

It quickly becomes apparent that the story is really about the relationship between the swashbuckling protagonist and two other characters. I think saying to much about that would introduce serious spoilers. Needless to say one of the relationship is rather ambiguous too, and seems set to escalate in both intimacy and treachery. All three are set up for some heavily foreshadowed trouble from the overall ruler of the entire region, the Priestess who seems to control the dragons that serves as Gods even to the grishnards.

While a respectable length at 178 pages Embers is at best half of a novel in that it ends before any of the plot lines are in any way resolved. Thus, I had to immediately by the next in the five books series.
Posted by veinglory at 7:10 PM No comments:
Labels: 9/10, Emily Veinglory, Fantasy and Sci Fi, review 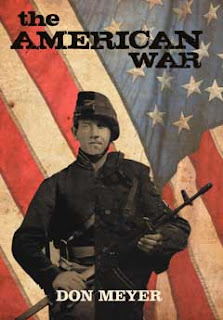 The back jacket of Don Meyer’s new book says, “In the summer of 1969, elements of the 101st Airborne went back to the A Shau Valley in South Vietnam.  In the summer of 1864 the 10th Vermont, part of General Rickett’s Third Division, marched into the Shenandoah Valley in Virginia.  Sam Kensington was there at both campaigns.”  As a military history buff and veteran (US Navy) I found this description fascinating, and so I asked Don Meyer to send me a copy of his book.  I’m glad he did.

The book starts with a chapter laying out the fall of the A Shau Special Forces camp in 1966.  It then moves into the preparations for the Union invasion of the Shenandoah Valley in 1864.  We soon learn that the extremely detailed accounting we’re getting of the 10th Vermont’s preparations are the dreams of one Sam Kensington, grunt, waiting to move into the A Shau Valley.  Sam is no Civil War buff, and he has no idea why he’s dreaming about this war, or even what campaign of the war he’s seeing.  Since he’s seen action before in Vietnam without these dreams, he’s a bit concerned that he’s cracking up, and ends up talking to the Company XO, who happens to know a bit about the Civil War.

The book then proceeds in parallel, with us following both Sams, first in Vietnam, then Virginia, then back again.  Meyer, the author, is a Vietnam vet, and so his Vietnam scenes are more realized then the Civil War scenes, but both eras are portrayed in a griping and compelling manner.  Sam in both wars is just a grunt, so his war isn’t the big sweeping arrows on a map, but rather the personal war of keeping himself and his buddies alive, while maybe getting lucky enough to score a hot shower and hot food.

I really enjoyed reading The American War.  Having said that, sometimes self-publishers could really use a story editor and this is one of those times.  We find out way at the end of the story, in a section that feels a bit bolted on, why exactly Sam is having his dreams.  Without giving away too much, it’s the reverse of Checkov’s Gun, in that the ending is not foreshadowed.  The heck of it is, it would have been a matter of a paragraph or two to adequately foreshadow (or at least support) Meyer’s ending.  Despite that flaw, I can wholeheartedly recommend The American War to any buff of military history or historical fiction.

One of the unfortunate problems facing the self-published author is sorting out the scam artists from those who are genuinely helpful.  A key resource in figuring that out has been the group Writer Beware.

Well, I am pleased to note that Victoria Strauss of that blog has won the Independent Book Blogger Award for best publishing industry blog.  Victoria, keep up the good work!
Posted by Chris Gerrib at 9:02 AM No comments:
Labels: Chris Gerrib, publishing

Another Chance at Free Books 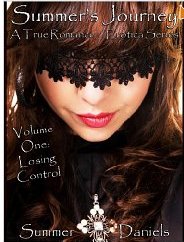 Now, the key factor in evaluating erotica is seeing if it generates a reaction in the reader.  (“Reaction” – yea, that’s the ticket!)  So, by that standard, I have to evaluate Summers’ Journey as a success.  Volume 1 generates the reaction of “what happens next” while Volume 2 and 3 provide an explicit view of what happens.

Ms. Daniels is not one for laying out scenery, and her assignations happen in a generic upper-middle-class suburban America, but for this particular story that works well.  Sometimes in erotica the best thing the writer can do is get out of the way.  The volumes are priced at either $1.99 or $2.99, although there is a Collection One for $5.99 that has all three volumes included.  I found Ms. Daniel’s journey interesting, and look forward to later editions.