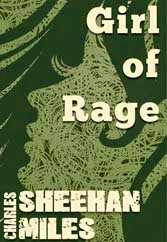 I’ve never personally met Charles Sheehan-Miles, but I find that he’s an amazing author.  He first came to my notice with a pair of near-future SF/ thriller titles.  Then he switched gears radically and cranked out a trio of romance novels featuring the Thompson Sisters.  Now, he’s back in thriller territory, with another trilogy of books in which he’s wrapping up the very complicated story of that star-crossed family.

Girl of Rage is the middle book of this trilogy.  The book features Andrea Thompson, who at age 16 has now twice been the target of professional assassins.  To say she’s having a rough few weeks is perhaps an understatement.  One would think that the daughter of the soon-to-be Secretary of Defense wouldn’t be having these kind of issues.  One would be wrong.

Of course, Andrea is discovering that much of what she thought she knew about her family is dead wrong, including who her real father is.  Apparently something about that fact is worth trying to very publicly kill her over.  Also in peril is her mother Adelina, who we discover married Mister Thompson in Spain at the age of 16.  Adelina is in California, dodging one assassin, while Andrea and her ex-soldier brother-in-law are dodging others in Washington DC.  Also involved are not one but two princes, Saudi and British.

The story is fast-paced, although both action and characters are kept believable.  Girl of Rage is a middle book in a trilogy, and so both relies on the previous book and ends at a cliff.  But since they’re ebooks and priced right, don’t let that stop you from enjoying the latest from Charles Sheehan-Miles, America’s most criminally neglected author.

The concept of the “bear”--the hairy fleshy man especially as desired within the queer subculture of the same name—contains much that could inspire a poet. This collection exploits that potential ably. Not every book can open my eyes to the erotic possibilities of hobbits. Not to mention jocks, cowboys, furries, statues, warriors, and gods (especially the ancient Greek variety). There are all kinds of aesthetics and all kinds of messages about things like sex, love, beauty, getting old and--of course--daddies (literal and metaphorical). I did miss poems mining some of the more arcane possibilities of shape shifting in other cultures (pig, bear, wolf, salmon even) and the actual habits of the real bears—but overall this is a very diverse anthology. There are a lot of interesting insections in these works that mash contrasts together like sexy and seedy or like exquisite technique is dressed up in “aw shucks” crass and macho language.

High points for me were points that stray a little from the central tropes of the theme or found a new angle on it (there being only so many references to beers, beard burn, caves, and flannel shirts that one can take). Like Alfred C Corn’s “Young Soldier” (”out from an overhang of black eyebrows / the left one playing the rôle of circumflex”), Ed Madden’s “Each arrow is a story. Each wound is a mouth,” and Cornelius’s “Marriot Hotel Bar” in its entirety which reminds me of the poetry of MS Merwin although the similarity is not a literal one. And the uneasy simplicity of Dan Stone’s “Rough” is certainly memorable.

On the down side, the tone waivers between classically poetic and wry through a kind of camp that does not always seem deliberate. It can be a fine line between ardent archetype and unintentional parody. And if you are going to riff on a poem by Marlowe, I really don’t think you should change the meter. And there were some grammatical and editing choices whose purpose (or error) I debated. Erratic capitalization that seem to lack symbolic purpose and spellings like “OK”  and “t-shirt”. I suppose one should not question these things, but I do when they don’t seem to have stylistic purpose. There were also a few poems I considered completed clunkers from beginning to end. Let’s just say it takes a lot to sell me on rhyming couplets even when used ironically.

Overall this is a various and interesting collection but perhaps a tad overlong because it is hard for a collection of so many parts to have an overall identity. However given the number of poems included the average quality is impressively high and undoubtedly the equal of any University-Press-blessed volume. This is an anthology that takes the reader to some interesting places whether your are already a fan or just "bear curious".