Earth has set up trade with a peaceful alien race, the Himbians. This adds a lot of interest to Kim's job as an veterinary technician as alien animals become part of veterinary practice.

The world building in Vertical Play is mostly great, the main character and her work are entirely believable.  However this is a novel in search of a story.  It consists of largely a series of short anecdotes about patients in the clinic.  There is a lot of "telling" about the home life of every veterinarian and some slightly preachy opinions about subjects such as when you should euthanize an alien pet and ownership of exotics.

There are some inserts that deal with some people who don't like the aliens and are sabotaging the equipment they are using. But this side-story never really goes anywhere and Kim is mainly an on-looker to it. Vertical Play had many excellent qualities, but the lack of a central narrative prevented it from being a fun read.

REVIEW: Sins of the South 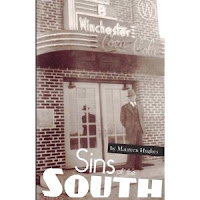 I grew up in a small town, and now live in a suburb of a big city.  When I tell people in my current community where I grew up, they immediately think of “Mayberry RFD” and seem to think that my local police officer carried a gun with one bullet and the height of his day consisted of dealing with grade-school candy thefts.  I smile, and remind myself that, of the 78 kids who graduated in my class in high school, three of them (that I know of) have spent time as inmates in prison.  In short, small-town life is not anything like Mayberry.

So, it was with great interest that I purchased Maureen Hughes’ book Sins of The South, billed as exposing the “shocking mafia influence in small towns in Illinois.”  The book primarily tells the story of Lester “Shot” Winchester, a nightclub owner in far Southern Illinois who died of a gunshot wound in April, 1956.  I don’t think it’s much of a spoiler to note that Hughes at least thinks Winchester was murdered.

“Shot” Winchester was no saint, having at age 15 killed a boy for cheating him at a floating craps game.  After Winchester got out, Prohibition was in full roar, and so he got a variety of jobs running moonshine, managing speakeasies / whorehouses, and related illegal activities.  Perhaps ironically, Winchester was killed over a crime he probably had nothing to do with.

Sins of the South is an interesting book, but alas not a particularly well-written one.  Hughes’ story wanders in and out from Prohibition to the post-WWII era of legalized gambling in Illinois.  Much of the book is a laundry list of the various local mobsters in Alexander and Pulaski counties (both at the bottom of the “V” formed by the Ohio and Mississippi Rivers).  These mobsters and the corrupt local sheriffs, judges and other political figures were sub-fiefs of the big crime operations in Chicago, St. Louis and for a time Detroit (important due to its easy access to Canadian booze).  Still, whether the triggerman is a local ne’er-do-well or an out-of-town hitman, the victim is every bit as dead.

Much of Sins of the South is stories told to Hughes by anonymous and elderly survivors of the period, which leads to some of the conversational quality of the prose.  And again, Hughes storytelling is a bit convoluted, apparently in an attempt to create a bit of drama where there isn’t much.  Still, I found Sins of the South an interesting book, and a useful antidote to the Mayberry RFD story of rural Illinois.  It’s a book more for history buffs than casual readers, but at 198 pages it’s accessible to all.

My Story -- Pretty Much True by Kristen Tsetsi 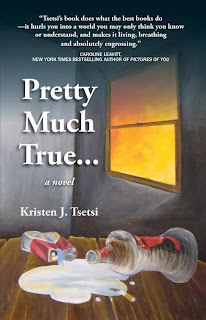 I’ve known Kristen Tsetsi for quite some time, and I admire her as a storyteller, as a self-publisher, and as an artist. I’ve read her non-fiction and reviewed her short fiction here on this blog when she first released Carol’s Aquarium, so when she asked me if she could celebrate the re-release of her self-published novel Homefront here on The Pod People site, I said sure, we can treat it as a My Story and explore the journey of Homefront from self-published tour de force to the now titled and traditionally published Pretty Much True. So without further ado, I leave the page the Kristen:

Pretty Much True…, at its most surface level, is about a woman waiting for her lover to get back from war. Why this story?

For two reasons, really. First, I’m very attracted to, and captivated by, human drama and the truth that lies silently beneath the surface of almost every relationship conflict. Those very private, complex factors that build and steam.

Second, I believe love pain has to be the most intoxicating, distracting, passionate, discombobulating emotion we’re capable of experiencing, and it’s something I’ve always been compelled to write about. When I was in a marriage I no longer wanted to be in, that desire to escape appeared in my short fiction. Another time, when I recognized the difference between married love and real love, one of which I had and one of which I wanted, that became short fiction.

When the man I’d loved for a decade finally became mine only to deploy to Iraq three weeks later, I was thrust into the most torturous experience of my life, both emotionally and psychologically. The nature of the uncertainty has only been matched by the month my father spent in ICU with less than a 5% chance of living. Combine that kind of uncertainty with the romantic love of two people who have been, by all accounts, star-crossed for a decade. (Can there be a more complicated, messy love than one interrupted by war? Likely not.)

Once my husband—who was “just” my boyfriend, at the time—had been home for a year and I was able to release the after-effects and look at the experience from an artistic perspective, I knew it had to be a story. Not only because it had all of the elements that make the kind of story that would have me riveted if I were to read it, but because there was so much truth to explore, so much about a war story people had never been exposed to before in all of the soldier stories they’ve read or seen in theaters. It’s part of the larger war narrative that’s been largely absent and that is every bit as valid.

Pretty Much True… isn’t a Dear John love and war story. It’s not about missing someone, pining away, or sticking yellow ribbon magnets on a bumper. It’s about a state of not knowing, of losing control, of the friendships and love that form or fall away in a world that, to those who are closest to war’s effects, has become a funhouse mirror reflection of the world they knew before.

If Pretty Much True… were a movie, what cable channel would it play on?

The creator of Unfunnyme.com, Tera Marie, recently said of Pretty Much True…, “If books were people, Pretty Much True… would be the love child of The Bell Jar and The Things They Carried.” So, I’d have to say HBO. There’s a lot of intensity in the story, and HBO handles intensity amazingly well.

A cross between The Bell Jar and The Things They Carried. So, it’s character-driven.

Very much. There’s no “In a world when…” plot to speak of, but there are several character arcs launched from the springboard of the war, and each character has his or her own personal conflicts that are exacerbated by the war. They also have their unique ways of dealing with those conflicts, whether that means, for example, making a decision about a romantic relationship or coming to terms with nagging demons.

Some nasty politics surrounded the Iraq War. How political is Pretty Much True…?

Politics appear without making the book a political statement. It would have been impossible to ignore that aspect. When the person you love most is, as you see it at home, in constant danger of dying, and politicians and TV commentators are yammering on about the war like it’s a game of RISK, that has an impact. It’s just as much a part of the war story as bullets flying in a war zone.

Who is most likely, and least likely, to enjoy this book?

Early copies were read by readers whose interest has long been genre fiction, and they wrote to tell me that the story had captured them. Men have read advance copies and have expressed things to me in emails that led me to believe they enjoyed it as much as, if not more than, women. So, the two demographics I might have expected would be cool toward it have surprised me by becoming the most likely to enjoy it.

Those who may not enjoy it as much are certain military spouses who mistakenly think this is commentary on all military spouses or significant others. The protagonist's behavior, a vehicle used to communicate a larger feeling, would probably not speak well of a group of people, were the character intended to represent them. But she isn’t. Just as Full Metal Jacket is one story about specific characters and their war experience, just as Casualties of War is another story about specific characters and their war experience--and not commentary on all soldiers of all wars--,Pretty Much True… is a war story about very specific characters, and a certain set of war experiences. There are many, many war stories. This is just one of them.

How much of Pretty Much True… is true?

I couldn't be more excited, and more honored, to be published by Missouri Breaks Press. Pretty Much True... has had a few years of publishing struggles, with more than a couple "almosts," and to finally land with Craig Lancaster's indie press, to have someone of his judgment and experience want to publish this book I've believed in and continue to believe in, means more to me than I can say. I will be forever grateful.


Find Pretty Much True... at Amazon.com and other online bookstores, or order it from your local bookstore.

Posted by Cheryl Anne Gardner at 7:00 AM No comments:
Labels: My Story