So, I just posted what was not exactly a glowing review.  So thought I would check out how positive or negative--in general--the POD review scores are. 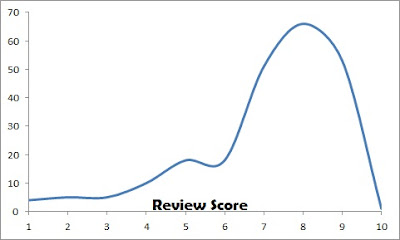 The poetry in the collection is dark and emotive, but it depends heavily on over-used images such as vampires, darkness, chains and broken wings. The majority of the poems also have the same subject: a  female in love with the wrong guy.

Some of the formatting does not seem mindful to me. Like every line starting with a capital letter, most likely because MSWord does this automatically? Use of the possessive apostrophe and other capitalization seems erratic.

I might have been able to recommend this, at least during period where it is free, except that this collection alternates dizzyingly between reveling in subjects like self-mutilatory cutting and necrophilia, and shrill preaching against drug use and abortion. This strange brand of 'gothic moralising' made reading this short book actually fairly unpleasant for me.
Posted by veinglory at 12:59 PM 2 comments:
Labels: 1/10, poetry, review

I was reading the Kindle preview of Jack Mitchell's book "99 Blogging TRips" when I came across the a very efficient interest killer in the introduction.

I mean, I have read some doozy introductions by authors, from explanations that the author is a prophet of God to assertions that they (as a fan fic writer) know the characters far better than the person who created them.

And then there is this:

"...there are still a review 'hate' reviews. But guess what? That's okay, because those people weren't right for the book."

He goes on to quote and rebut and criticize some specific Amazon reviews, in the book. So the first thing this book says to me is "if this book doesn't work for you, it is because you suck".

I was checking the book out because the author is actively soliciting reviews, but somehow I think I will be passing on this one.
Posted by veinglory at 9:17 AM 2 comments:

I knew it had to happen eventually.  My first negative review.  I was really excited about this book, partly because of it being true crime and partly because of the subject being from upstate New York like myself.  It made it that much more disappointing that I really disliked this novel.

The author tells a very jaded tale of being scorned by a woman who he met on the internet.  Who he moved in with pretty much as soon as they met in person.  Neither party had a steady source of income or employment, both sound a bit selfish and they spent more time having sex than getting to know one another.  Odd that this relationship failed.

The true crime aspect of the book stems from a possession of marijuana charge.  Of course, he is completely innocent and must have been set up by the woman who rejected him and ended up with his friend.  He wrote an entire book trying to shine a negative light on her, an innocent light on himself and point fingers at her for murder, for theft, for setting him up.  He claims the local police are in bed with her and helped set him up.

The book is long (386 pages) but not filled with quality content.  A lot of the material should have been removed as it does not add to the storyline.  In one chapter, he prepares a spaghetti dinner and goes into detail about how he prepared it.  Right down to opening up a jar of Ragu sauce and what flavor it was.  It feels jumbled and unorganized.  He rehashes the same points several times throughout the book.

If you are very bitter about the loss of a love and feel that you have been set up by this person, then you may find some comfort in knowing you are not alone by reading this.  I, however, did not enjoy this book at all.  If I did not select this book to review and would have been reading as a personal selection, I doubt I would have finished it.  I do know for sure that in the event I ever find myself divorced, after reading this book I doubt I will ever place an online dating ad.  In the future, I will be sure that True Crime means more than just a possession charge as well.

I am giving a rating of 2/10 only because the author did take the time to write out such a lengthy book.

Review: The Death and Life of Sherlock Homes

(I would note that “The Death and Life of Sherlock Holmes” is also a play by Susan L Zeder [1993]. This review is not about that play.)

In this story a modern woman, Jackie Bowman, somehow ends up transported through time to meet Sherlock Holmes shortly after he stages his death at the Reichenbach Falls. For most of the book Sherlock and Jackie meander through foreign countries, most notably Tibet, during the three year period referred to Sherlockians as 'the great hiatus' (between the when Sherlock ostensibly died at Reichenbach and the first story dated after his return to London).

On one hand the narrative seems to lack much in the way of happenings: mysteries, fights, overt romance etc.  One the other hand it is the first book in quite a while that I intended to put down, and never did. It had that ineffable “unputdownable” quality for me. To my taste I would have dropped the first and last sections as I think the core story from first meeting to full commitment would stand better on its own.

There were some affectations I found annoying, running jokes, excessive cultural references and the sudden importance of getting a pet cat at the end of the story.  But in general this is not the Mary Sue or wish fulfillment kind of “fan” story you might expect.  Nor is it in anyway comparable to the Laurie R King stories in which Holmes is also paired with a female protagonist. Nor is it a Sherlockian pastiche designed to resolve ambiguities in Conan Doyle’s stories, although the author seems at least passable familiar with canon (I am an enthusiast rather than an expert myself).

The Death and Life of Sherlock Holmes is a Sherlock Holmes pastiche, time-travel story, and slow burn romance. It has elements of all three of these genres but basically has its own identity as a story. I know that I read it, and I enjoyed it, and that is the most important thing as far as I am concerned.

Several of the bloggers I read mentioned favorably Marko Kloos’ new novel Terms of Enlistment.  Since it was a $2.99 ebook, I took a flyer on it and bought a copy.  This proved to be a good investment.  I had to admit, I didn’t think it would be as interesting as it proved to be.

Exhibit A for my concern is this “back of the cover” copy: The year is 2108, and the North American Commonwealth is bursting at the seams. For welfare rats like Andrew Grayson, there are only two ways out of the crime-ridden and filthy welfare tenements, where you're restricted to 2,000 calories of badly flavored soy every day. You can hope to win the lottery and draw a ticket on a colony ship settling off-world, or you can join the service.

This sounded a lot like one of hundreds of 1970s and early 1980s “Earth as armpit of universe” stories with small colonial wars – the kind of stuff Jerry Pournelle and David Drake made a living off of.  And the first third of the book – Andrew Goes to Boot Camp – was true to form.

Then things went from “routine” to “really interesting.”  The first really interesting thing was that Andrew got stuck in the Territorial Army, which was stationed on Earth.  There, he got into a really interesting Mogadishu-style fight in Detroit, one in which the inhabitants of the tenements had significantly heavier weapons and better tactics than they were supposed to have.  A mystery was created.

Having created that mystery, the author then walks away from it.  Kloos has Andrew get his dream gig – assigned to a Space Fleet frigate with his girlfriend from boot camp – and ships him off to space.  There, on arrival at Andrew’s first extrasolar planet, surprise number two happens, creating another mystery.  Like many self-published authors releasing their first book, Kloos has one sequel in the can and ready to come out, and other sequels are in the pipeline, so we are promised that both mysteries will be addressed in the coming books.

Which is good, because I found Terms of Enlistment a very interesting and well-written book.  Kloos has cleared all the technical errors of copy-editing, but more importantly his characters are well-developed and believable.  The pacing of the story is fair – the boot camp segment drags a bit – but that’s a quibble. I finished the book in one sitting, which is my personal standard for grabbing my attention.

Kloos said that he was unable to get a publisher interested in his work, and I think I see why – Terms, although a great read, is structurally a “fix-up” piece.  Fix-ups were common in the early days of science fiction, and are books where an author takes multiple smaller works and slightly modifies them to become one novel-length work.  In this case, Kloos has two novellas that he’s ported into one book.  The seam between the novellas is pretty obvious, but for me (and most readers) I don’t think that’s an issue.  It’s only a problem for commercial publishers.  Overall, I highly recommend Terms of Enlistment.