Some time ago, Hank Quense asked me to review his science fiction / fantasy novel Zaftan Entrepreneurs.  I did, and found it unique and humorous.  So, when the PR for his new title Falstaff’s Big Gamble crossed my desk, I agreed to review it.  I’m darned glad I did.

Hank took a simple concept – lift some characters from Shakespeare, put them in a box and shake vigorously – and added his own unique touches.  For example, Hamlet, who is actually the first character we meet, is a dwarf, and prince of the town of Denmarko.  He does in fact meet a ghost, but it’s not his father – the recently-deceased is too busy in the afterlife to show up, so he sends another ghost.  Oh, and Hamlet?  He wants to be a beekeeper, so his famous soliloquy is “to bee or not to bee!” (No, I did not misspell ‘bee’!)

In similar fashion, Othello is a dark elf, married to the troll Desdemona, whose grandmother is the “Godmother” of the local crime syndicate!  Othello has been padding his military resume, a problem now that he’s Minister of Homeland Security.  Sir John Falstaff, a human, needs no padding, but he does need money.  At first all three of these characters wander the stage separately, but when they do meet, it’s perhaps not exactly the way Shakespeare would have done it.

I am a tough audience when it comes to humor, but Falstaff’s Big Gamble was right up my alley.  It’s not a laugh-out-loud book, but it is amusing and light-hearted.  Quense gets the essence of each character correct, and runs that essence to its logical if farcical conclusion.  Everybody gets what they deserve, if not what they want, and you the reader will have a lot of fun watching it happen. 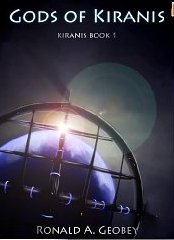 Ronald Geobey emailed me to request a review of his book, and mentioned that he read and enjoyed my book The Mars Run.  I replied back that “flattery may not get you everywhere, but apparently it will get you somewhere” and I agreed to review his book.  This review may plumb the limits of where flattery will get you.

Gods of Kiranis, Geobey’s first novel, is a genuine space opera.  The opening chapter involves Earth being encased in some kind of space-based cage, which greatly disrupts life in the myriad orbiting space stations.  Things get worse from there.

Now, you would think, correctly, that this is right up my alley.  Yet I found myself completely unable to get into the story.  Geobey writes well enough, so it’s not an issue of mechanics, and there is a solid story there, but I didn’t like it.

I think I had a couple of problems.  The first is that I had no sense of place or time.  Yes, it was Earth, and since people were living on space stations it was the future, but the stations weren’t described, nor was the level of spaceflight defined.  I mean, first the cage showed up, then on page 30 or so alien warships show up.  The arrival of (apparently hostile) aliens is the first mention of their existence, and we the reader learn nothing about them.  When clearly hostile events happen (like, for example, 9/11) people immediately speculate, and that’s an excellent way for us the reader to get filled in on all the bad guys in the universe.

My second problem was that the tech in the book looked shockingly like used furniture rented from the back of a Star Trek the Next Generation (ST:TNG) set.  In Kiranis, we have warships big enough that people have private cabins with their own bathrooms, the Captain of one such warship has his girlfriend living onboard, and his interior security is bad enough that she can be kidnapped and hidden on his ship with (apparently) nobody seeing this.  Oh, and all of this is happening while they are desperately investigating the alien cage that appeared above Earth.

Update - Gods of Kiranis is free on Smashwords!

For me, reading Legal Problems was a fairly unpleasant experience.  Basically we meet a young married couple. One spouse cheats and the marriage is destroyed. Let's be clear about one thing, this is not genre romance even thought it is listed in that category.

Possible spoilers, mouse over to read: Both main characters are also very unpleasant.  The affair that occurs is between a lawyer a client who was recently raped so brutally as to cause permanent internal damage.  So, terribly unethical lawyer as well as a terrible spouse.

Both characters seem poorly realized with one flipping from not even being able to comprehend same-sex sexual attraction, to have secretly always being on the down low. Both use very distasteful homophobic slurs and not just in the heat of the moment or early in the story. Nor is there any evidence of themes or explorations of the human conditions that would elevate this dreary tale to some position of literary merit.

I certainly won't be reading the sequel. I am giving this book 2/10 because there are coherent sentences that do tell a story, just not one that I enjoyed reading.
Posted by veinglory at 6:18 PM No comments:
Labels: 2/10, Emily Veinglory, review, romance 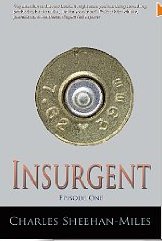 First, Charles Sheehan-Miles recently released Episode 3 of his serial novel Insurgent.  Readers of this blog know that I reviewed and enjoyed the first two episodes, and so I'm looking forward to reading this new release.

Second, I recently purchased a copy of Maureen Hughes' book Sins of the South, a book about the mafia connection in small-town Illinois.  Hopefully it was a good decision, and either way I'll let you know.

What A POD Peep Reads: Starbridge

One of the nice things about POD and its kissing cousin, ebook publishing, is that it allows authors to bring their backlist out to a new audience.  Those of us that don't hang out at used bookstores get to read "new to us" authors while the author gets some money off of an old book.  One of those finds comes to me from a friend of the blog, Ann Crispin, half of the team at  the invaluable blog Writer Beware.  The book is her debut novel, Starbridge.

Starbridge is a novel of first contact, as told primarily through the eyes of Mahree Burroughs, a young colonist returning to Earth on the merchant vessel Desiree, which is captained by her uncle.  It's also a bit of a romance, as Mahree develops a crush on the ship's doctor.  Finally, it's a real page-turner of a book.

One of the problems with creating aliens in science fiction is the tendency to create humans wearing latex masks.  Crispin's aliens definitely aren't wearing masks, nor does she fall into the other trap of a homogeneous species.  Crispin also addresses something often glossed over in science fiction, the difficulty of communicating with an alien species.  They don't all speak English and read Shakespeare, you know!

Since it wouldn't be a story if everything went smoothly, it doesn't.  There is some violence, as threatened in the back-cover blurb, but personal, and not of the blow-stuff-up-real-good variety.  Overall, I found Starbridge a highly readable introduction to an author I hadn't read before.