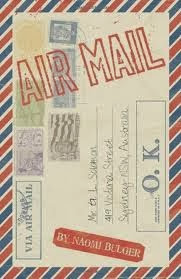 Book Description: Reclusive old Mr. G.L. Solomon's favorite things are single malt whiskey, Steve McQueen movies, and gingersnap cookies. He hates processed cheese, washing detergent commercials, and the way the teacup rattles in the saucer when he picks it up. Solomon has become accustomed to his lonely routine in Sydney, Australia-until the day he begins sporadically receiving letters in his mailbox from a complete stranger. On the other side of the world, Anouk is a mentally delicate young woman living in New York who insists she is being stalked by a fat woman in a pink tracksuit. When Anouk declares to Solomon that she is writing "from the Other Side," the old man breaks away from his daily grind of watching soap operas and reading Fishing World and travels to New York to find her. As he is drawn into Anouk's surreal world of stalkers and storytelling, marbles and cats, purgatory and Plato, Solomon has but one goal-to unravel the mystery before it is too late.

Part epistolary confession, part Alice and Wonderland, part journey into madness, this quirky little book winds up being quite the philosophical handful. When I first began reading it, it reminded me of a clay animation film titled Mary and Max about an eight-year old Australian girl who randomly begins to write to an obese middle-aged man from New York with Asperger's syndrome. In Air Mail, the main character is a young woman, an ex-patriot from Australia living in New York City, randomly writing to a retired gentleman in Australia whom she chose from the phone book. Yes, seems very similar, and it is to a degree. Anouk relives all the depressing details of her life through her letters to Mr. G.L. Solomon, but when she thinks she is being stalked by a fat woman in a pink tracksuit, things take a more fantastic turn, Anouk's looking glass being the marbles that hold the stories of her life, stories that are being manipulated in a much larger universal game in which pink tracksuit is only one of many storytellers who may or may not be what they seem reminiscent of the angels in A Life Less Ordinary.

Anouk is a psychologically fragile young woman, and she finds solace in her unsolicited scribbling to Solomon. Her writing style is much the same as we often see in psychiatric patients. Solomon is intrigued, but generally unmoved by the letters and gifts until he receives the marbles. Routine is all Solomon knows, and he is comfortable with the way the twilight of his life is playing itself out, until one day Anouk writes him from the "other side," proclaiming that she is dead. This is the trigger, and promptly Solomon buys a plane ticket to NY and leaves his entire life behind. He believes Anouk is in trouble, and he believes he can help her. He can, but not in any traditional sense of the word help.

The story is very well written, full of the fantastical, the surreal, and the philosophical themes I love so much in this sort of story, yet it still stays grounded in the realities of mental illness without being overbearing about the subject matter. Anouk could be suffering from schizophrenia or any number of psychological issues, and Solomon clearly has a severe case of OCD. Or do they? Maybe their souls are simply on a journey. We can ask, do marbles hold the stories of our lives to be played and manipulated by a bunch of intellectual hippy-angel storytellers? Who knows. This sort of story is left to reader interpretation, as it should be. The characters were well developed, and the letters, sometimes frightening, were never overly sentimental. The "yes" letter being the most disturbing and the most telling in the entire book.

The book has been called charming, funny, quirky, profound, and yes, it is all those things. It is also very dark and insightful and compelling. I have to say, this is one of the better books I have read all year. Easily done in one sitting, but a much better read if taken slowly. As for presentation, the cover is lovely and the interior formatting is pleasing to the eye. Very well done. You know that old philosophical saying: A life unexamined; well, here is a perfect example of the miraculous things that can happen when a life is.
Posted by Cheryl Anne Gardner at 10:13 AM No comments:
Labels: cheryl anne gardner, review

Thoughts on The Craft -- c.anne.gardner 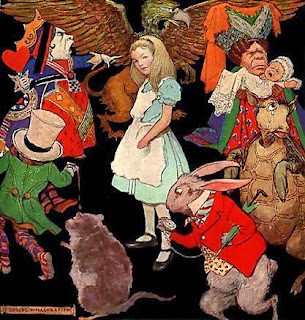 Depart too far from the norm of human experience and you bore the reader, who will no longer care what happens to your characters once they have stepped through a dozen dimensions of time and are consorting with twelve-sided green monsters somewhere in interstellar space. The true artist, who knows how to deal with elusive material, is more likely to work his tricks right in your living room, where the reality of familiar things lends strangeness to whatever he may conjure up.
-- Philip Van Doren


I love the Literary Fantastic in fiction. Yes, even to the extent of Tolkien’s hobbits, Adam's lunacy of space travel, Kafka’s human insect, and Carroll’s Wonderland, but much of the Fantastic that I am particularly attracted to is of the sort where human psychology goes very wrong, where the familiar becomes strange, where the world we live in somehow animates itself and turns upon us.

I have always been attracted to the Gothic and the Dark Romantic literary subgenres. Many of my mentors wrote with a Dark Romantic’s heavy hand: Poe, Lovecraft, Bataille, Kafka, Marquez, Ungar, even Shakespeare's tragedies ... the list could go on an on. Much of what strikes me about this style is the macabre and supernatural feel the stories have to them without necessarily being bona fide “horror” stories, which include supernatural creatures. In many of their works, the macabre and supernatural aspects of the story are firmly “grounded” in the human psyche. Man is the monster, and the natural world is the essence of supernatural. Write fiction with that logic and you cannot go wrong.

These authors have taken the vile aberrations of humanity and transformed them, some into allegory, some simply into a deeper look at the human psyche. Nevertheless, what all of these writers have in common is their ability to make the elusive not only tangible but relatable. These authors have been able to combine perfectly the ordinary and the extraordinary in such a way that we don’t question it. This goes back to my earlier discussion on subjective details. Fiction readers don’t necessarily want a state of the union, a “this is how things are” bricks and mortar view of the world. They want to feel the world through the characters. They want character perception, perception that is uniquely different than their own, and for that to happen, an author needs to provide detail which is fluid yet fully grounded in reality, is passionately associative and wildly dissociative, is sketchy yet vivid, and all the while, is plausible without a doubt. Tall order.

Yes, it is possible for an author to take great leaps of faith with credibility "if" they stay rooted in humanity. Kafka’s main character in The Metamorphosis awoke one morning and found he was a bug. Literally implausible but psychologically frightening because emotionally, it can happen. Another example is that the mirror is said to have two faces. How often do we struggle with our own reflection, and so Alice’s looking glass portal becomes very very real, and the philosophical conundrums she is presented with transcend the fantasy world. This type of transcendence is potent. So much so that we can sympathize with Dr. Jekyll’s struggle with his alter ego, Mr. Hyde.


There are many modern authors who have succeeded in this endeavour quite splendidly: Ellis' American Psycho, where the "status quo" has become surreal to the point of absurdity in that it not only creates the monster but allows the monster to "be" unrecognized and unnoticed; or Palahniuk's Fight Club, where the emasculated narrator feels alienated from prevailing social versimilitudes, ; or Johnson's Jesus' Son, where the nickname "fuckhead" defined the narrator's entire existence, and, more so than the heroin upon reflection, coloured his view of the world.

So, even straight literary fiction can benefit from the principles of the Literary Fantastic. When we struggle with humanity’s deep psychological, moral, and philosophical issues, we often find ourselves at odds with what is real or what we have naively perceived as being real. Nevertheless, we are innately capable of analysing our own "dream" logic. On a daily basis, when the world itself becomes dark and foreboding, when our fears manifest themselves, our personal perceptions of the world are often challenged, even negated. This is the realm of the fiction author. The realm where, with a little bit of prowess and a lot of finesse, the objective details can be manipulated and the truth can be exposed. This is the realm of the author who knows, as Clive Barker so eloquently put it, how to “tap the vein” no matter what genre you choose to write in. Review: Flashes From The Other World 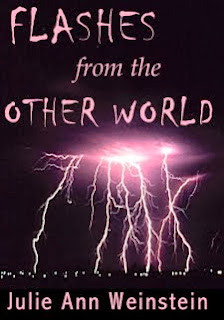 Book Description: Magic without the hocus pocus, these stories explore the ethereal blur between reality and not, between dream and sleep, between love and 'other than' love. They present relationships with a tender wackiness. Tossed into the mix are mischievous ghosts, who give the talking plants and even the seductive and vocal grains of sand a run for their money. Quirky and offbeat, these stories will touch your heart, although they may tug at your funny bone first.

As many of you know, I put my own WIP aside this year in order to devote the entire year or more to writing and working strictly within the flash fiction community. I have had dozens of stories accepted for publication, and I am currently a contributing editor at Apocrypha and Abstractions, a flash fiction e-zine specializing in micro flash, so when I received the query to review Ms. Weinstein's collection, I was thrilled. I was no less thrilled reading it.

Ms. Weinstein is a very insightful writer, and her flash fiction has that ambiguous surreal quality I look for when I am going through submissions for the e-zine. I would accept her work in a heartbeat, especially for the way she approaches the darker themes.

This collection is quite an assortment. You never know what you are going to get from one story to another. We have absurdities, paranormal encounters -- real and imagined -- and we have all manner of relationships, deliberate and coincidental, happy and sad and disturbing. Weinstein has the ability to take the mundane and make it wild and extraordinary. There are some hauntingly sentimental paranormal stories, and stories that were so hilariously bizarre, you will never look at your produce the same again. In contrast, many of the stories delve into darker territory, addressing many common and perplexing psychological issues, and those were probably the ones I loved the most. Each story is unique in a cirque du strange sort of way. The thematic treatments and artistic license used here demand a reader's undivided attention, and Ms. Weinstein’s voice shines through. Writing flash fiction is a difficult task to take on. It requires a certain sharpness of vision, a command of the language, and a discipline the longer forms can ignore to a great degree. In Flashes, Ms. Weinstein is fearless in her experimentation, and that, to me, was worth experiencing. My only concern is that the cover needs a whole lot of work and does not match the quality of the words contained within.
Posted by Cheryl Anne Gardner at 9:56 AM 2 comments:
Labels: cheryl anne gardner, review 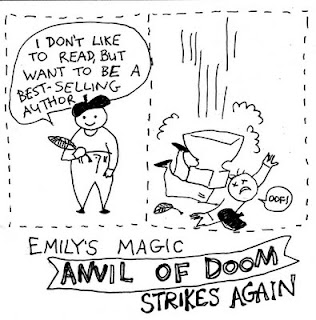 Posted by veinglory at 7:19 PM No comments:
Labels: cartoon

Sunday Picture: Out of Sight 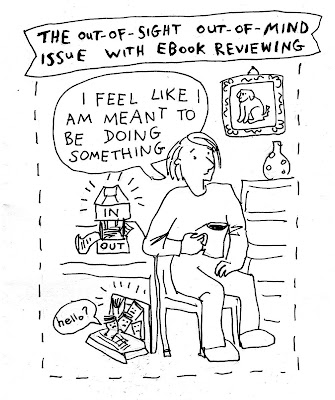