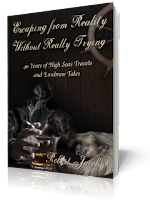 As an ex-Navy man, when Robert Jacoby queried POD People about his book, Escaping Reality Without Really Trying, subtitled “40 Years of High Seas Travels and Lowbrow Tales,” I had to request it for review. The book proved to be an interesting read.

The book is the story of “Ronnie,” a 40-year veteran of the US Merchant Marine. It’s written in an extremely conversational tone, as if Ronnie is sitting across the bar from you (if you know Ronnie, this would have to be at a bar, bordello or at least with a bottle in hand) telling you all his old sea stories.

I have to say, Ronnie either has an encyclopedic memory or some kind of log book, because he remembers every ship and every captain he served under. I also have to tell you that Ronnie considers his true occupation as drinking, screwing hookers as a second job, and working on a ship as a hobby. All of this does not make for a tale to be read at your local Sunday School picnic. But then sailors are rarely seen at Sunday School, so it all works out in the end.

As a work of literature, Escaping Reality is somewhat unique. There is no plot, merely a long string of anecdotes of Ronnie and his various escapades. Most of the anecdotes are interesting, including his two weeks as a stowaway on a British merchant ship, sailing into Cambodia while we were bombing it during the Vietnam War, and more shipboard and pier side shenanigans then one can shake a stick at.

I personally found the exhaustive length of the book, well, a bit exhausting. At 526 pages, this is not a quick read. In my personal case, having been to sea as a working mariner myself, I wasn’t terribly shocked or surprised by Ronnie’s exploits. Had I been writing Escaping Reality, I would have made a tighter work. But that’s me, speaking from having done a few of the things Ronnie’s done. If you haven’t been to sea (and no, riding a Carnival Fun Ship does not count) your mileage will vary. If you are interesting in learning what life in the Merchant Marine is really like, or just want to escape your cubicle, then I can highly recommend Escaping Reality.

Dymock's was called on their self-publishing contract which grabs all right to a work (including subsidiary) for life of copyright.  Their response seems to have been to make the contract harder to understand, but not actually change it.
Posted by veinglory at 12:55 PM 1 comment:
Labels: D-Publishing


Roy Edroso is a freelance writer in New York, and enjoys a modest amount of fame writing a left-leaning blog. Back in 2008, he got a deal to publish his first novel, the modern hardboiled Morgue for Whores. Alas, the publishing house he signed with went bankrupt, so he eventually decided to e-publish the book. Since I read his blog, I decided to buy the book.

The book is the story of Jim Berends, a Brooklyn-ite with a dead-end IT job, no serious relationships and a bit of a drinking problem. Well, Jim didn’t think he had a drinking problem – he got drunk, passed out and woke up the next day. Then Jim wakes up from a drunk with a pair of dead and naked bodies in his apartment. Jim decides to ditch the bodies instead of calling the police. This proves especially problematic when an additional body shows up.

For the suitable audience, Morgue is an entertaining read. Edroso wrote the book in first person, which is deceptively difficult, but in this case works well. The narrator is a witty sort, while being an appropriate mixture of self-doubt and competence. The investigation of “who dumped the bodies,” which drives the book, proceeds at an appropriate pace – not to briskly (Berends, the investigator, is an amateur with a day job) but not too slowly. Several characters, including Berends’ apparently hyper-normal neighbors, were well-concealed surprises, which Edroso pulled off without making his narrator look stupid.

Apparently Edroso sprang for a good editor, as I found the technical aspects of the book solid. About the only thing I thought was a bit off was the actual explanation of why the bodies were showing up. That’s a quibble in an otherwise highly enjoyable book. I can wholeheartedly recommend Morgue for Whores as a book well worth reading.
9/10
Posted by Chris Gerrib at 2:11 PM No comments:
Labels: 9/10, Chris Gerrib, review

It seems that Writer's Digest has tired of just offering lots of advertising space to predatory and over-priced self-publishing services, and decided to get into that business for themselves.
Posted by veinglory at 9:19 PM 3 comments:
Labels: Abbott 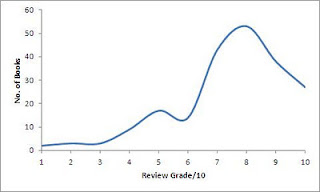 Out of idle curiosity I decided to look at what is happening with the number grades attached to our graded reviews.  The grade distribution shows a bias towards higher marks. The average grade given to a reviewed book seems to be about 7/10.

I think that strikes a reasonable balance between being not too fluffy and also not too bitchy? Number grades are all a bit arbitrary anyway... but I think they bring out whether the book was basically enjoyable or not.  That isn't always clear from the text of the review.
Posted by veinglory at 1:46 PM 1 comment:

The POD people blog is seeking 'occasional reviewers'. This not-very-onerous position gives you access to the review request yahoogroup.  If you see a book you would like to review you reply to the author directly and CC the group to let others know the book is taken.  We would then hope to see a review posted (or forwarded to me for posting) within three months.

Occasional reviewers have no participation requirement and, like the rest of us, receive no compensation other than review copies and a linked byline.  If you would like to join our merry band please send an email to podpeep@gmail.com with a sample or link to a review you have written  (or other evidence that would lead me to expect that you are capable of writing a book review).
Posted by veinglory at 12:59 PM 2 comments:
Labels: help wanted

I am a regular attendee at Windycon, my local science fiction convention. Since I’ve been attending, Isfic Press, which is owned by the same organization as the con, has been putting out a book. This year’s edition was Aurora in Four Voices, a collection of five novellas by the convention Guest of Honor, Catherine Asaro. Isfic Press has a tradition of putting out fine quality books, and this year they kept up the tradition.

Catherine Asaro is a true Renaissance woman – her day job is as a PhD in mathematics, but she dances, sings and writes wonderful stories. All five of the stories in this book were previously published, but are collected here for the first time. They are each a gem, well worth reading. The stories are:

Aurora in Four Voices – drawing on Catherine’s mathematical background, this story involves a convicted murderer, not terribly math-literate, who is trapped in a city that revolves around math. In a pleasant switch from the same-old-same-old, he is rescued by a woman.

Ave de Paso – this story is a straight-ahead fantasy, set in contemporary New Mexico. I found it very haunting, with strong emotions and complex characters.

The Spacetime Pool – this story won Catherine the Nebula Award, and it’s easy to see why. It appears to be a fantasy, involving a woman being magically transported from the Appalachian Trail to a realm of castles and armored men on horseback. But Janelle, the woman so transported, is smart and too active to wait for rescue. Unfortunately, Janelle’s understanding of mathematics allows her to discover that returning to her own world is not possible.

Light and Shadow - this story is based in part on a scene in the great space movie “The Right Stuff.” In that scene, Chuck Yeager is seen walking away from his plane, crashed during a test flight. Here, Catherine puts Kelric, the hero of several of her Skolian Empire series, in the Chuck Yeager role. Mathematics also figures prominently, as Catherine uses imaginary numbers (such as the square root of -1) to build a faster-than-light engine.

The City of Cries – this long novella was written on commission for Mike Resnick, who included it in his anthology Down These Dark Spaceways. The novella is a hard-boiled crime / space opera set in Catherine’s Skolian Empire. There’s not much math involved in this story, but Catherine has a lot of fun inverting the tradition of cloistered women.

The book is rounded out by a non-fiction essay in which Catherine attempts to explain some of the mathematical concepts introduced in the other stories. She proves to be a good teacher as well as writer. Overall, I found Aurora in Four Voices highly entertaining. You should order a copy today.