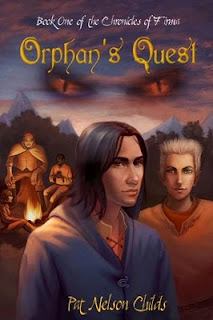 Orphan's Quest is a solidly entertaining fantasy about a young man with a hidden past and a sinister destiny.  Rokey thinks he is going to  join the monastic order that has raised him since he was two years old.  After being cast out he joins up with a band of adventurers to determine where he came from, why he seems destined to save or doom the world, and why--on a related note--so many thugs and monsters are trying to kill him.

That said, the band of adventurers is out of Dungeons and Dragons central casting and so are the wandering monster, dark dungeon and village of the elves encounters.  The party starts out by complaining about a lack of funds, but then seems to have limitless cash to pay for travel, purchases, bribes and so forth.  Oh, and the great quest occurs in stages that are never more than two days apart, travelling on foot, even if one town is in a desert and the next is in a jungle.

Childs does write very well and put an interesting little twist on fantasy staples like bards or amazons.  Nevertheless just a little more either realism or over-the-top camp would have moved this story from a bit of fun to a really memorable story.  At the close of the book the reader has some idea what has been going on all along, but Rokey is still just a befuddled 'chosen one' with a hot elf-boy lover (loving not shown on the page).  I am not sure that the inevitable triumph of good over evil scheduled for the sequel is something I really feel the need to read.