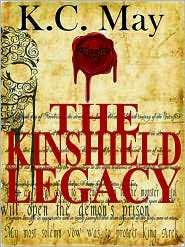 Page 99 from The Kinshield Legacy
By K.C. May
A Fantasy Novel
Reprinted with Permission: Copyright 2010 by K.C. May. All rights reserved.

Book Description: A mysterious stone tablet with five magical gems has sat abandoned in a cave for two hundred years. The kingdom is in ruins, with only warrant knights to keep the peace. But then, the gems in the tablet, one by one, disappear. Warrant knight Gavin Kinshield is a man of many secrets. He's the one deciphering the runes in the tablet. Unless he can find a suitable replacement, he'll be Thendylath's next king. All he really wants is the letter written by his ancestor Ronor Kinshield, champion to King Arek, confessing the truth of how the king perished. Daia Saberheart, warrior of the Viragon Sisterhood, wants to find the future king and help him claim his rightful place. Blacksmith Risan Stronghammer wants to reward him with a powerful weapon. And the sorcerer Brodas Ravenkind wants to capture him, steal his secret and claim the throne for himself. But when Gavin finally tracks down Ronor's letter, he gets more than he's bargained for, for the truth of King Arek's demise is far darker than he ever imagined.
---

"Yes," Risan said. "The sword I made for him has his gems in the hilt. They are the Rune Stones. He'll be the next king of Thendylath."

"Ahhh," Jennalia said, nodding and grinning. Her eyes stared past him. "Rune Stones. I understand now. A ribbon will finally be burned."

Risan looked at Arlet with wide eyes. A ribbon will be burned. Gavin was fulfilling his destiny. A shiver swept through him. No wonder his dream had been so powerful.

"We want to buy a special enchantment for his new sword," Arlet told Jennalia. "We have gold."

Jennalia chuckled and went to the dresser again. "You need no gold here, my dear." She opened a drawer and withdrew a piece of parchment. "Enchantments such as this cannot be bought for any amount of money." She shut the drawer and motioned Risan to follow her to a table. "Put it there."

Risan removed the leather wrap, set the sword on the table, and stepped back.
Jennalia laid the parchment on the table and ran her hands lightly over the sword. "The enchantment I will put on this weapon is very strong. It will bind to whoever claims the sword."

"You must not let anyone take up this weapon before the king does. It will speak to anyone with a warrior's spirit. No one but the king must utter its name else the weapon will bind itself to the wrong person."

"No one must handle the sword."

"Whoever speaks its name owns the sword. Only the owner's death can unbind the enchantment, which weakens every time it is unbound."

Jennalia opened another drawer in the dresser and withdrew an inkpot and a brush. She set them on the table and opened the inkpot. She dipped the brush into it. Risan watched the brush as she drew it across the parchment, first a horizontal line, then slightly curved line to the left, and then another at a downward angle to the right. She drew in the ancient script of Fartha, but he did not recognize the symbols. When at last she lifted the brush and wrapped it in a piece of paper, Risan studied the drawing, cocking his head. On the parchment were three symbols, one atop the other.

"Strength in battle," Arlet whispered, pointing to the top symbol. "But written backward."

"Yes, backward," Jennalia said. "The other two are for sharpness, so the blade will never dull, and Warrior's Wisdom. With the Rune Stones in the sword, the enchantments will become even more powerful." She placed three deep brown gems on the parchment around the three symbols and waved her hand in the air over them.
--

K.C. May was born in Chicago and grew up in the mid-western USA and in Hawaii, attended University of Colorado in Boulder and graduated with a B.A. in Russian from Florida State University. In 1985, she moved to Taiwan to teach English and study Mandarin Chinese. She also lived in the Arizona desert for 24 years, where she founded and ran a non-profit Rottweiler rescue organization, studied Ken-po karate, went backpacking, tried sky-diving, dabbled in bodybuilding, did some downhill skiing, renewed her interest in motorcycling, and spent some time on the shooting range. In 2010, she retreated to cooler, greener Georgia. She earns her living as a full-time writer.

If you would like The Podpeople to feature your Page 99, send us an email to: podpeep at gmail dot com with the subject line Page 99. Please include a link to your preferred e-commerce site, a cover jpeg, and paste your page 99 into the body of the email or attach it as a .TXT file. If your page 99 happens to be a chapter start or chapter end and does not contain a full page, you may use the full page before or after your page 99. One page only please.
Posted by Cheryl Anne Gardner at 1:00 AM
Labels: Page99

Thanks for featuring my page 99. Most of the book's reviews are on Amazon, but here's one that hasn't been cross-posted:
http://sfbook.com/the-kinshield-legacy.htm

Hope you enjoyed the excerpt!