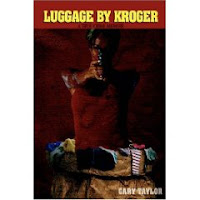 Gary Taylor is an interesting fellow, self-described as one-third rogue, and his book Luggage By Kroger is an entertaining read. In 1979, Gary was working the courts beat for the Houston Chronicle. He was also getting a divorce from his second wife, and broke enough that he was using a Kroger grocery sack to transport his dirty laundry. (Hence the title – Luggage By Kroger).

While all this drama was going on, Catherine Mehaffey, a young and attractive Houston lawyer, was suing for alimony from her boyfriend of three months, who she called her common-law “husband.” The case wasn’t going that good for Catherine, until on January 15, 1979, Catherine’s boyfriend, George Tedesco, turned up bludgeoned to death in his garage. Undaunted, Catherine amended her case to proceed as his widow, despite being the obvious lead suspect in the murder. Fully aware of Catherine’s background, Gary Taylor started a relationship with Catherine. Four months later, Catherine put a bullet in Gary’s back.

The story of that shooting and the tempestuous, illogical and frantic maneuverings of the controlling Catherine Mehaffey take up a good third of the book. Another third of the book is an entertaining recounting of Gary’s life as a young reporter. For example, the first day on the crime beat in Houston, Gary lost $25 in a poker game that broke up when a bank president, armed with his personal gun, was killed chasing bank robbers. The final third of the book is taken up with the story of Gary’s divorce from his second wife, a soap-opera-like story of infidelity and drug use.

All three of these narratives are skillfully and carefully woven into a coherent and interesting tale. Gary has a self-deprecating sense of humor, and a reporter’s eye for critical details. He’s also done some research (alas after his shooting) into the nature of mental illness, and has come to understand that the obsessive “love” of Catherine Mahaffey was really a need to control everybody.

The Mehaffey story, which was well-publicized at the time, became one of the inspirations for the movie Fatal Attraction. Taylor’s book is a window into that attraction. It’s also a damn fine read. There’s adult language and sex, so it’s not for the faint of heart, but I highly recommend buying Luggage By Kroger.
RATING 10/10
Posted by Chris Gerrib at 3:21 PM
Labels: 10/10, Chris Gerrib, review

This sounds like an interesting story--but I wonder if the title is well-chosen. It is clever once you know what it means but not very descriptive on first glance?

I liked too much this blog,is very useful, specially because i going to travel frequently now and i want to get a comfortable luggage. I think all this information will be helpful.
___________________
buy viagra

I must to prepare my luggage because I´ll go to Costa Rica, there I found a house through costa rica homes for sale and I can´t wait more time to go there. But I never went before. So is important to me to know everything, like peoples, transportation, climate. But the most important thing is, I am very happy.