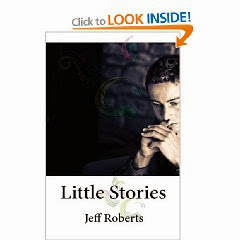 The book blurb says: Little Stories takes a critical look at the inevitable moments of betrayal and loneliness in our awkward quest to love and be loved, but the reader will discover the value - and even joy - to be had by looking backward and facing the past.

Yes, these are everyday stories of love, betrayal, and the general taint of humanity, so they are very relatable … maybe too relatable for me. With each story, I was looking for the edge. I wanted to gaze into the abyss, feel the heartbreak and the pain on a poetic, philosophical, and existential level, like we do in say Henri Barbusse’s “Hell”, but I didn’t with this book. Editorial issues aside, it was a mild and enjoyable read. The writing is succinct, using contemporary language and style, the story construction for the most part is tight, and the points are driven home very simply. There are a few aimless stories, but overall I would say: “Chicken soup for the faulty human.” Except, for me, there wasn’t too much to chew on. I was expecting the essence of Dark Romanticism that I normally look for in stories such as these, but to my disappointment, it just wasn’t there. I also, as a rule, prefer more internal exposition and unselfish inwardness from the characters. My taste for literature is on the darker side, with poetry and finesse reminiscent of a Shakespearean tragedy, so for me, personally, the stories felt a bit stark, and the editorial issues were so frequent that they really got in the way.

In the first story, we have a young couple living together, and the female wishes to go out for a few hours and visit her ex. The man obliges, being all understanding and cool about it. No drum roll needed here, we already know where this is going, and predictably, she shows up early in the AM, a dishevelled mess, and is forced to admit that she slept with the ex. The couple then has the predictable fight, with predictable dialog, and then they go to bed to rest. As he holds her tightly, his only thought is that he feels alone. The end. To say I wanted more is an understatement. With such a pat story and predictable outcome, I, as a reader, need a new take. I wanted to know the myriad of other thoughts cluttering his mind. We know why he felt alone, betrayal is a lonely place, but there is more that goes on in the mind of the betrayed: the conflicted thoughts, even the vile distasteful ones … We know they are there, and I wanted to see it. But my taste for truth was not fulfilled.

In the second story, we have a wealthy pretentious couple making off for a drive when they notice a woman working her way through the neighbourhood who obviously does not live there. In between the man bitching about his teenage son’s laziness and leering at the strange woman, he proceeds to describe her as a cross between a tweaked out whore and a goth. Judgements are made on sight and the story ends with: “Well, she doesn’t belong around here. This neighbourhood is for good moral people.”

And the collection goes on like that, job loss, alcoholism, the death of spouse, the birth of child, bad grades, etc. There are some brilliant lines, though: “Stepping into the main hall of the bus station, I saw what looked like a Norman Rockwell postcard for urban detritus.” or “Across the basement a hobby horse looked on silently with its mane flossed over with a sweater of dust, its springs swollen solid with a frosty coating of dross. An empty baby crib stood alone with it blankets tangled as they held years of mold topped off with some water stained pillows, decaying and yellowed from the sclerosis of time.” Yes, those lines pretty much sum up the universal theme of the book, and I wish there were more of them.

I would say this collection is sort of a modern day Aesop’s fables. Classic and timeless, humanity’s faults are laid bare in a very pat non-judgemental way, and the lessons are pointed and very clearly portrayed – the ink certainly didn’t run here. Too bad.

I liked it, but the style wasn’t as engaging for me as it could have been. I didn’t feel my emotions challenged. This writer has got a talent for noticing the painful mundanities of life, but that talent seems stifled, a bit too deliberate and contrived, in some places downright awkward. However, much is personal preference, although, a merciless editorial once over would have helped as well. So I have to give the book a slightly lower rating based on the pronounced and profuse editorial issues and that it lacked the sharp edge I normally like in contemporary literature of this sort. Humanity’s vile atrocities, the lies, the selfishness, the betrayals, the hope lost, and the precarious balance between life and death … I think all that deserves a grittier presentation -- less ink, more spit, more blood, and more passion. The writing shows promise, but we only glanced at the shadow; we didn’t get to look it in the eyes.

Major props for mentioning Henri Barbusse’s “Hell”, which I really need to get around to writing about one of these days!

Ah another fan of Barbusse. Was that not one of the most amazing books you have read. Wrenched my soul straight out of my chest.

I reviewed it over on my main review page on Amazon.

You would probably like Pessoa's "Book of Disquiet". I will be reviewing that over at Breenibooks in the next few weeks I hope.