REVIEW: 'Living with the Truth' by James Murdoch 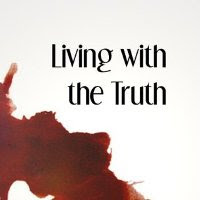 Jonathan Payne is waiting on Death. Not because he wishes to die, but because he feels it’s long overdue. That is how our story begins. Jonathan is the owner of a small, almost antique, bookstore. His mother long passed, gifted with a tidy inheritance, Jonathan is a bachelor by choice. If it weren’t for the laundry list of failed sexual excursions, he would be hermit. He seems to have reached a point where all the illusion, or delusion, of life has lost its lustre.

Jonathan Payne is a man who preferred to “doodle in the margins” of his life rather than writing his great Opus, and admittedly, he is satisfied with the state of his affairs. Yes, this story is chalk full of anecdotal truths and realizations that the protagonist is well aware of but too tired to care about. This book begins at the end really, the end of a futile journey where the only enlightenment is that the journeyman is not only aware of the futility but has accepted it. Payne is a morose soul. And here we have the thrust of the story, Payne will be forced into enlightenment, will be forced to reject the futility, and that force comes by way of a strange man in a business suit who calls himself Mr. Truth and is as campy and without decorum as a know-it-all can get.

Now, altercations with the grim reaper, or truth, or agent of (insert applicable subjective principle here), or whatever you need to call it, are common—too common—but it’s the flavour of the prose that drives this story: glib dipped in eloquence and then rolled in a coating of irony. Everyone can relate to Jonathan Payne. How often have we said, “It just is what it is.” We have all said that from time to time when confronted with futility, and we have all resigned ourselves to the fact that we were too tired to try to make it anything more than what it is, and so we take a whatever, who cares attitude. How often do we slap a bit of delusion on things in order to make them bearable? We are all compulsive liars to an extent, and we lie to ourselves most of all. Deception and delusion, a disposition to which Jonathan Payne is perfectly suited, and like many, it is his preferred milieu. Well, until Mr. Truth gives him a swift kick in the ole bollix. Mr. Truth is here to stay for a while, a little holiday perhaps, and he knows everything about Jonathan, from his idle musings to his not so idle sexual proclivities. And Jonathan is going to know everything as well, in a way and with a depth he has been avoiding all of his life. This is the moment where Jonathan will actually confront himself, for better or worse, and in some scenes the confrontation is hilarious and absurd, in others, deeply moving. Mr. Truth might seem a bit snarky and heavy handed at first glance, but in reality, he has a light and sensitive touch … not to mention that he is one of the most endearing antagonists I have come across.

I like to pick a line that generally sums up a book, that is if one stands out. In this book my choice would be: “We’re only as sick as our secrets. It’s a fact of life, what we fear tends to control us which means everyone has a religion—with a small g, if you like—a way of looking at yourself in relation to the big picture.”

Conceptually, and in tone and texture, the story is wonderful, for those who enjoy literary works of the dark and penitent, peppered with sarcasm variety, which I do. It reminded me a little in style to Christopher Moore’s A Dirty Job, with the added flavour of local dialect. However, there are some editorial issues I had a difficult time ignoring, which made the reading experience, on occasion, a bit trying.

Reviewed by Cheryl: Cheryl Anne Gardner is a retired writer of dark, often disturbing, literary novellas with romantic/erotic undertones. She is an avid reader and an independent reviewer with Podpeople blogspot and Amazon where she blogs regularly on AmazonConnect. She is an advocate for independent film, music, and books, and when at all possible, prefers to read and review out of the mainstream Indie published works, foreign translations, and a bit of philosophy. She lives with her husband and two ferrets on the East Coast, USA.
Posted by veinglory at 7:19 PM
Labels: 7/10, cheryl anne gardner, review