REVIEW: 'Fu(k All' by Matthew Damon 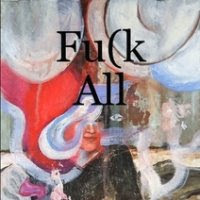 I don’t normally read memoirs, mostly due to the fact that most tend to be pining narcissistic have pity for a lost soul type stories or a venue for soap-box postulating. This one does have some of those aspects to it, so I had to ask myself, “Does this tale hold some truth about the human condition?” It does, very honestly, so honest that some readers might view it as ugly. Therefore, I treated it as if I would review a bit of fiction. The writing is glib, intentionally confrontational, dark, and very funny. Written like snippets from a journal, it is blatantly in your face critical of societal norms and humanity in general, but at the same time, it reveals a deeper depth of knowledge about the psyche of a truly confused and lost soul who seems to think he might find his own godlike existence in the flesh of another. Not divinity lost—divinity misunderstood. He wants to exist in reality as his real self yet doesn’t have a good hold on who his real self is, and he lacks the most basic people skills to make even a half-self acceptable. At times, we get the impression he has no care for being acceptable. Through self-deprecation, and a little self-mutilation for that matter, our author has more than a few off-handed yet very profound epiphanies, despite the depth of his arrogance and vanity. Those little extraordinary gems make this book worth the read.

All manner of self-punishment is explored here: obsessive love, self-loathing, self-inflicted torture, abuse, envy, desire, and reckless self-destruction. This is the story of the twisted, unrealistic, delusions of a sexually repressed yet hormone enraged young man at odds with his world…very reminiscent of “Jesus’ Son” by Denis Johnson and other equally tragic tales of disappointment gone awry. Our tale begins with our lad running off to Europe, seeking truth and a more realistic view of the world than he has been spoon-fed by his parents. Unfortunately, upon returning to New York City, he finds the hedonistic free-spirited lifestyle of his dreams is not really a reality in any conceivable sense of the word. Homeless, penniless, jobless by choice, he seeks to find his salvation in love. Oftentimes we get the impression that women appear to the author as some magical force, a conduit, through which he will be able to express love for himself, release his cowardess, and embrace a real life, which is touching at times. For all his puerile male behaviour, we do get a sense of tenderness and a real desire to discover the strength of the man within. On the flip side however, oftentimes women appear to him more like satisfying side-dishes, something to appease a hunger, and after he has used them and then subsequently finding them objectionable, he has a tendency to digress, endlessly spouting misguided derogatory meanderings about the essence of the female gender and how it’s an affront to him as a man.

As we move through the memoir, we share some of the author’s experiences if only at arms length. We have a lot of ‘less than desirable’ living arrangements, endless degradation, and there is no end to the women he falls so insipidly in and out of love with, but we only get a distant sarcastic view. It was as if the author were deliberately distancing himself from the painful more interior conflicts within himself…profound moments of true awakening would blossom, only to be frosted over a moment later. But this is also very typical for a young emasculated man in this sort of position—to project, to misunderstand and misinterpret the inner-self based on preconceived notions and immature dogma stemmed from parental and societal corruption through guilt—to take an avoidance tact through sarcasm and humour. Seeking to live a life of anarchy in defiance of the norm. Deliberately living a self-defeating lifestyle in order place blame versus taking a good long look at one’s inner-being in an effort to gain true clarity, understand one’s strengths and weaknesses, and re-create oneself into a real three-dimensional being. Here we have an extremely self-conscious out-of-place man seeking to numb himself right down to the core by whatever means necessary, sex, drugs, sarcasm, and an obsessive need for love. Happiness is elusive simply because he doesn’t have a clear grasp on what actually will make him happy—it’s all delusion and illusion—some external, some internal. It’s tragic and leads to a tragic lifestyle more often than not. He desires to change everything and everyone around him to suit his own beliefs. He wants the world he wants and yet is not willing to examine let alone change anything within himself—he admits hurting people, but never seems to take responsibility for it. There is no sacrifice, no compromise, and this is by choice. He wants to release himself from superimposed moralistic integrity and pursue his own sense of freedom—a freedom replete with petty crime, drug experimentation, wandering aimlessly from bed to bed while falling in an out of love with maniacal abandon, unable to control the rage and despair building inside. Will our less than zero hero manage to reach enlightenment, at the very least find some sort of happiness? Not in this story.

Onto a literary note, the book is well-written, minor grammatical issues aside. The descriptive detail is spot-on, and we can get a real feel for the bleak scenery. The book is candid and raw. The author is gawky and ill-at-ease in his own flesh and in his own manhood. Its honesty induced a wide range of emotion from this reader: pity, disdain, frustration, and downright unbridled anger. One might think that the author cared little for inducing emotion, as the style is very matter-of-fact, but these sorts of memoirs do tug at our base emotions, we can all relate to the scenarios and feelings found within to a certain degree. I found it very real life amusing in a tragic sort of way. Some might find the subject matter objectionable, but reality is objectionable more often than not. This is not a fairy tale—not by a long shot. I do think that the author captured male angst to a decent enough extent; the title definitely defines the style of this book—brash, uncompromising, and in your face —utterly romantic at one turn, crass at the next. I think that with a little polish this might actually be something spectacular. On an human note, we can all relate to this common story—we all simply want to be who we are under the skin, accepted, loved. What do we do when who we are is not socially acceptable—what then? Is our protagonist a misguided misanthrope, a deviant psychotic, a pitiful lost soul, a visionary, a libertine, or just an asshole? Do those labels truly define a person, or are we all a little bit of each. The reader will have to decide. The Author says, “Fu(k All.”

Reviewed by Cheryl Anne Gardner: Cheryl Anne Gardner, author of four novellas, is an Executive Assistant by day, an avid reader, and an independent reviewer with Podpeople.blogspot and Amazon where she blogs regularly on AmazonConnect. She is an advocate for independent film, music, and books, and when at all possible, prefers to read and review out of the mainstream Indie published works, foreign translations, and a bit of philosophy. She lives with her husband and two ferrets on the East Coast, USA.
Posted by veinglory at 6:57 PM
Labels: 8/10, cheryl anne gardner, review

I posted this over at Lulu as well. I can only assume writers will find review cross-posting helpful?