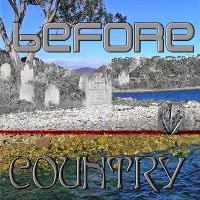 My thought process while reading .before Country was (roughly) hmmm, intriguing, quite good, very good, baffling, intriguing again, bemusing, baffling, I have no idea what is happening, [frustration], oh a good bit, what?, double what?, oh another good bit but, what?, the end. There are books I have loved, and books I have hated. This book I both loved and hated. This is a) why I am giving it a 5/10 and b) why numerical rating scales generally aren't all that helpful.

Here is the author's description: .before Country is a tight collection of seven Science Fiction short stories and code poems. Five were written before Country was named. Two describe the beginnings of settlement. Four code poems recount the ongoing upheaval after initial terraforming. Some say this time of excess was deliberately encouraged, in order to forestall the conservative staidness that infects most isolated post-pioneer societies when they celebrate the pioneer spirit of their forebears, instead of doing it. The last story, The Isle of the Dead, relates a moment of metamorphosis. Rooted in personal agency, the hero Smith seeks a treasure but his outsider perspective rewrites the kernel and creates a new beginning. This directly lay the way for the ecosocial emergence of Country, when Starkey founded the legendary Ripplinglee, the first steadhouse. These tells prequel the three Books of Country (Fall, Born, Home) which best describe the time of the steaders. These will be released some time in the future.

You ability to comprehend, and become interested in, that description is probably a better predictor of what you will think of the book than anything I can come up with. I rather liked the more concrete story 'Exit Cave'--I think the author's poetic devices were sporadically very effective indeed but eventually I was so baffled as to just what was meant to be going on that my interest dropped off. The book felt a lot longer than it was because it took such an effort to read. That said it is clearly an experimental work, and the pdf version is free. So you can all have a look and see whether it worked better for you than it did for me. Be sure to let me know if you do.

A friend who read the review said I should write for a more visual media, like TV etc...