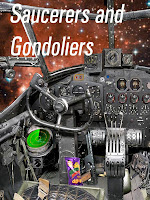 The “back of the book” blurb for Saucerers and Gondoliers says, “Flying saucers do not land in country parks. They are not piloted by Englishmen. They do not bear nameplates saying "HAWKER SIDDELEY AVIATION." And they are never, ever filled with smuggled catering packs of Monster Munch.”

Well, except for the flying saucers of Dominic Green’s newly-released book, they don’t. The book, written in the same spirit as 1980s “Doctor Who,” complete with a British Brigadier (well, Commodore, which is the RAF equivalent) has all that and more. The story is that of Ant and his friend, girl, Cleo, a pair of modern 12-and-a-half-year-olds who come across the Hawker Siddeley flying saucer in an English forest. For a variety of reasons, they get abducted, and end up arriving at an “American” colony called New Dixie.

It seems that, in 1947, the Americans discovered flying saucer technology. This was shared with the British and stolen by the Russians, and the three parties set up secret programs to exploit said technology, secret even to US Presidents and Soviet Premiers. These programs created colonies, a group of which broke away from Earth. Now, the colonies send saucers back to Earth to steal supplies, including packages of crisps. (I think that’s British for French fries.)

So, the premise is a bit out there, and much of the science doesn’t withstand a hard look, but darned if Saucerers and Gondoliers isn’t a fun romp. Mr. Green has a very British sense of humor, which colors the book. I suspect that “smart” kids will like that (I did when I was the target age for this book). There is a bit of redeeming social virtue in Saucerers – Cleo is black while Ant is white, a fact that confuses the local New Dixie-ites. At any rate, I found Saucerers a perfectly enjoyable short romp.

Both the title and the cover amuse me.

We were very happy to look for this web site.I want to thanks to this unique very good read!! Unquestionably taking pleasure in each little bit of it and i also saved as a favorite to follow fresh stuff you post. :-)

truly speaking this blog's all posts are well written and defiantly you are doing great job. IT Exams King