Review: Are You Sitting Down 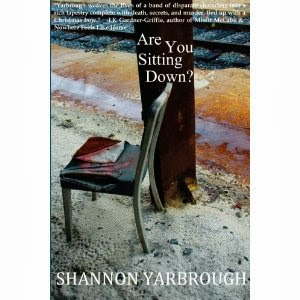 
Book Description: A rape victim raising a biracial baby. A drug addict haunted by a dead girlfriend. A homosexual mourning a dead lover. A teacher having an affair with his student. And a businesswoman sexually harassed by her boss. What do they all have in common? They all sit at Lorraine White's holiday dinner table; they are also her children. But Lorraine's children are not the only ones in the family dealing with ghosts of the past. This is the first Christmas the Whites have spent together since the death of their father. And it very well could be their last, as arguments ensue, secrets are revealed, and perhaps a murderer walks among them. In his latest novel, Yarbrough explores the damaged soul of one small town family and breaks through the boundaries of love, convincing his readers that no matter how hard life gets, sometimes the support of family is the only true foundation we have left to depend upon - whether we want to or not.

Let me just preface this review with a full disclosure. I know Shannon Yarbrough. We travel the same Indie review circles, and I reviewed an earlier book of his titled Stealing Wishes, which I enjoyed a great deal. As a matter of fact, the author thanks me in the back of this book for simply "getting" his writing. When he queried the Podpeople for this book, I happily snapped it up. I wasn't mistaken in doing so, because true to form, Mr. Yarbrough always gives the reader compelling characters and thought provoking storylines, albeit in this story, some of those storylines are quite disturbing. I reviewed this from an uncorrected proof copy, so there were quite a few formatting and grammatical issues to wade through, but I am sure these were rectified in the final edit.

As in all Mr. Yarbrough's work, the family members in this story are revealed to us with an honest objectivity some might find troubling. This book really begins at the end, if you will. All secrets are revealed with stark acceptance. All the characters have had time to dwell on their sins, and all have reconciled their various justifications. There are no labored confessions here to tug on our heartstrings. Everyone at this point has lived through their struggles and has accepted who they are, what they've done, and that the scars are permanent. The author makes no judgments here. Every crime is weighed equally, and by crime, I mean the crime each character has tried, convicted, and punished themselves for.

The story is told in alternating first-person points of view, each chapter devoted to one character, and aside from everyone being bludgeoned to death by Southern small town life, each character is connected to everyone else in the story not simply by familiar family bonds, but by the secrets they keep. Bigotry, infidelity, rape, murder, terminal illness, addiction, sexual orientation, sexual obsession, love, hatred, loss, and death, these are the ties that bind in this story.

As for the structure, it is much like any ordinary family holiday dinner: chaotic, which I felt served the story well. Each character is present "in the moment" and yet not because the past weighs heavily on each and every one of them. It felt to me almost like an American haunting of a sort, as if each character were a ghost cursed to reflect on what they had become instead of what they could be. Always drawn back into the past to dwell on the misery leveled upon them over the course of their lives. For some, that misery came with a poorly made choice, and for others, like Travis, the misery is downright unjust.

They say in a small town everyone knows everything about everyone else, and this story serves to debunk that myth. Here everyone knows what they think they know, and in reality, they only know what's relevant to their own personal struggle, and their attitudes towards the secrets that they think they know are really just reflections of their own inner turmoil. No one really knows anything deeper about the other characters aside from the surface wounds, which is sadly true to life. We talk to the people in our lives, but we rarely really listen. We claim to "share" our most intimate feelings with a certain few, but we rarely tell anyone the unadulterated truth about anything. That realism and truth about the collective consciousness is driven home quite powerfully in this story.

In this book, Christmas is a time for giving and healing, and what the reader gets to unwrap are the intimate confessions of a family who has never chosen to be honest with itself. The reader must decide where sympathy should be given and judgment passed. All the various perceptions in the story lack any real peripheral vision, allowing the reader to supply that on their own, which I loved. The reader is offered the rare opportunity here to be the psychoanalyst, and that, for me, made it a very engaging read. Nothing is ever really resolved by the end of the story, but the reader is left with the possibility of redemption to ponder well after the last page is turned. Very well done.