Review: The Vampire with the Pink Handbag 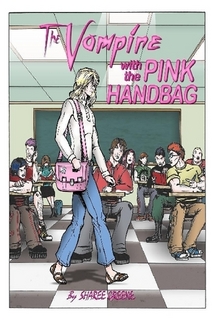 I wanted to like The Vampire with the Pink Handbag, I really did.  It is gay fiction, it has vampires--two of my favorite things.  Oriole, a unfeasibly gorgeous male teenage vampire is going to a school specifically for vampires for the first time.  He immediately becomes friends with two vampire girls, Jamie and Pear.  He also immediately gets caught up in a tumultuous romantic relationship with another boy called Josh, and entangled in Josh's mysterious connection with two other powerful teen vampires, Roland and, um, Rayon.  (Yes, a sexy mind-reading vampire named after a cheap synthetic fiber).

My first stumbling block was that none of the characters are very nice.  They behave erratically and several of the 'love interest' males are extremely abusive, violent, judgemental, unfaithful and controlling.  But that's fine so long as they love you, apparently.  I get that vampires in this world are slow to mature and at the mercy of a turbo-charged form of adolescence, but that doesn't mean I find their melodramatic dialogue and sexual violence acceptable and entertaining.  (By contrast Edward Cullen starts to look like a sensitive new age metrosexual.)

I suppose I could have gone with the premise and content of the book if the writing and formatting had allowed me to get swept up in the hyper-hormonal world of vampire college.  Unfortunately Ms. Greene's prose is feels like it needs some time to mature.  The narrative seems more focused on costume than motivation, and is rife with shifting points of view and jarring word choices.  Add to that the lack of right justification and spacing between paragraphs that ranges from none to four of five lines for no apparent reason, and reading this book became something of a chore.

The Vampire with the Pink Handbag is a reasonable and timely idea for a teen vampire novel but it fails in the execution, quickly becoming a mire of head hopping and bed hopping lacking either the style or narrative momentum needed to make this a book a pleasure to read. (4/10)
Posted by veinglory at 5:19 PM
Labels: 4/10, Emily Veinglory, review