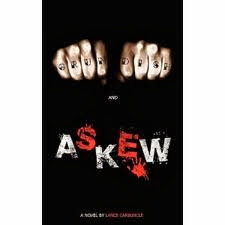 Book Description: Strap on your athletic cup and grab a barf bag. The Dr. Reverend Lance Carbuncle is going to kick you square in the balls and send you on a wild ride that may or may not answer the following questions: what happens when two white trash, trailer park-dwelling, platonic life partners go on a moronic and misdirected crime spree?; can their manly love for each other endure when one of them suffers a psychological bitch-slap that renders him a homicidal maniac?; will a snaggletoothed teenage prostitute tear them apart?; what is the best way to use a dead illegal alien to your advantage in a hostage situation?; what's that smell?; and, what the hell is Alf the Sacred Burro coughing up? Carbuncle's latest offering, Grundish and Askew, ponders these troubling questions and more. So sit down, put on some protective goggles, and get ready for Carbuncle to blast you in the face with a warm load of fictitious sickness.

Oh Grundish, when are you gonna learn that that boy [Askew] ain't right?

I had a lot of fun with this book. Sure, it's got my kinda characters: deviant, damaged, and absurd. It also has a whole lot of toilet humour, but that didn't stop me from loving Grundish and Askew or wanting to root for them even though I knew from the prologue that it was gonna end badly. Why did I love it so much, even with the detailed descriptions of puke and shit and masturbation and old donkey hairballs? Well, I loved it because it was about friendship and a man's word. It was about doing the right thing just because you know it's right, not necessarily because it is right.

Grundish and Askew have been friends since childhood, and they sort of have this platonic life partner situation going on -- not in a gay way. Born and raised in the trailer park, Grundish has been in and out of prison his entire life it seems, and Askew, the frailer and more sensitive of this demented comedy crime duo, knows he is damned by bad genetics and would rather die than find himself incarcerated; yet he can't stop getting himself into trouble. Grundish has taken the rap for him several times, cuz that's just the kinda person he is. He lives his life by a rather disjointed ethical code, but he's got one nonetheless. If I had to make a literary reference, once might compare them to Steinbeck's George and Lennie; although Askew isn't mentally disabled, he's just uneducated trailer trash. That's his lot in life, and he isn't happy about it. He'd rather be with his best friend running a yacht brothel in international waters, getting stoned and drunk all day long, and taking care of the "ladies." Delivering pizza to rich assholes isn't the life he aspires to but at least he isn't miming advertising on the corner and fucking his fat parole officer like his friend Grundish. However, a clean life just wasn't what they were meant for. If you want a modern reference, I thought the boys reminded me a little of Seth and Richard Gecko from the movie Dusk till Dawn: Grundish being Seth, the practical contemplative criminal who dreams of whores and a life of luxury in Mexico, and Askew definitely reminded me of Richie, a whacked out sociopath and downright psycho waiting to happen.

Couple that with a crime spree comedy plotline, Aunt Turleen -- the one-crispy-lunged feisty grand Aunt of Askwew -- the reaper dog she killed at the old folks home for licking her feet who now shows up in her dreams and gives her knives and cigarettes and tells her how best she can help the boys, Dora, the skeevy anorexic moneyed up teenage prostitute, and then throw in a whole cast of trailer park paedophiles and sex offenders and you got yourself a recipe for frozen meat assaults, burglary, Git-an-go convenience store stanky bathroom sex, a whole lot of interesting meals, and murder.

The boys are like a shit-storm of bad judgement. Like a Julian and Ricky without a Bubbles to rein them in. Aunt Turleen tries, but, despite her spunk, she just doesn't have it in her to keep the boys from going astray. When Askew kills a paedophile at the trailer park because the man ejaculates on him in a scuffle and everyone has to go on the lamb, including Aunt Turleen, it's like watching Smokey and the Bandit with a couple of criminal retards behind the wheel. Eventually Askew's mental state deteriorates to the point where he is beating people to death with his feet, kidnapping local teens and cutting their ears off, and subsequently killing the owner of the house they are hiding out in before they get a get a chance to finish their squat/burglarize and leave huge stinky turds in the toilet routine. It doesn't stop there either. After taking the homeowner's afternoon delight hostage, they wind up in a shitty ole junkyard with a puking farting old circus donkey, a dead Mexican hoodlum, and a bona fide police standoff. Throw in Turleen's dream rendezvous with the dead reaper dog and you've got one hell of a ride here.

As for the writing, the editing was excellent, minor formatting issues aside, and the author makes a deliberate decision opting to bash his head through the third wall, which didn't really bother me in the slightest. The author even made up his own words from time to time, which I also admire. Sometimes you just gotta embellish like that to keep it all fresh, and I howled when the TV news crew admitted they were just some made up part of a story and that they could do anything they wanted to whenever they wanted to, on air or not, including cursing and killing each other. Even Askew's constant mispronouncing and misspelling of words wasn't distracting enough to break the spell; although I did stop reading the footnotes after a while. They were funny, but they kept pulling me out of the story for no real good reason, so after about the third or fourth one, I just ignored them and read them later after I had finished the book.

Trailer Park Loonies on the Lamb would make a nice movie title, and just like the comedy series Trailer Park Boys, in the end it's all about friendship and tenacity, even if they don't make it to prison this time around. Askew even finds love. I won't lie, we are not talking high philosophy or some dark Jungian satirical tragedy replete with artistic brooding or soapbox preaching here: raunchy and nauseatingly vile, this book somehow manages to transform itself into a hilarious and touching story. Think Thelma and Louise with a couple of meaty, belching and farting misfits, sans the justification, and you've got it. I recommend this to all readers who like anti-hero stories and bizzaro criminal caper dramedies.