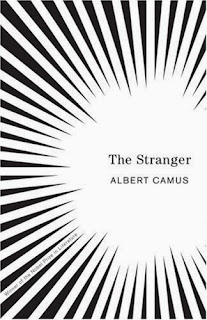 The Stranger by Albert Camus, one of my personal favorite novellas.

This book has been analyzed to death already - we can say its existentialism or point numerous fingers towards the words of Nietzsche and other great philosophers, and we can even make arguments regarding the virtues of death. Yes, this book does all of those things, but the subtleties of this book warrant our appreciation nonetheless.

This book paints a vivid portrait of extremes. At first, the simplistic so-called American language and writing style, the utter lack of imagery and emotion, not to mention Meursault's complete lack of sensitivity, put me off. Nevertheless, very shortly I came to realize that Merusault is not actually a mere character in a story; he is a mirror, reflecting back all humanity's apathy.

Meursault got used to his life, got used to the mundane, got used to the day to day drudgery, so used to it that "the emptiness of a man's heart becomes an abyss threatening to swallow up society." Meursault is the victim of indifference. Every pleasure in life is meaningless for him, worth less than nothing. And it's only after Meursault is imprisoned for murder and confronted with his own death that he sees all he has taken for granted. Not only does he see the great beauty in the world, he also sees humanity as the world's greatest ugliness. Meursault holds fast to this exposed truth; when confronted with his own impending execution in the end, his only wish is "that there be a large crowd of spectators […] and that they greet me with cries of hate." One wish, and that is to live one moment free from indifference.

Many struggle through this work. Yes, it can be seen as painfully boring in the beginning, but as you read, the story changes pace, the language shifts, and the beauty of the words begins to bloom as the pages turn. Meursault's situation might seem unrealistic, absurd even, but given a longer look ... its truth is glaringly apparent and quite disturbing.

Shameless Promotion Time: In light of the fact that novella month is almost over, I am offering a sale price of .99 cents on all my novellas. You can get them in Kindle format over on Amazon and in ePub format on Smashwords. The sale price is not yet reflected on B&N, Sony, or Kobo Books just yet, but I plan on leaving it in effect until at least the end of the summer. You can read free chapters at any of the sites as well as The Twisted Knickers main site. Happy reading to all.
Posted by Cheryl Anne Gardner at 2:00 AM
Labels: cheryl anne gardner, Lit review, What Does a Podpeep Read

The only real problem for me is that Meursault comes across a bit like the personification of a philosophical argument and less like a real person. From a writer’s perspective the book is a good example of not feeling you have to explain everything to your reader. Did you read my review of This is How? It’s heavily indebted to The Outsider. (I know you call in The Stranger over there but that just sounds wrong to me.)

Agreed. He is almost a caricature in that respect, but I don't mind when an author uses a character as a philosophical device. Like "Perfume" by Patrick Suskind. Jean Baptiste was used in the same fashion, and I loved it.

I don't always need my characters to be "real" people. I appreciate an exageration from time to time to make a very deliberate point. I did much the same with my dead narrator in Antiquity.

I sort of like "The Stranger." After all, he was not just an Outsider, he was a stranger, to humanity, to the world, and for the better part of the book, to himself. The change in title seemed fitting.

I need some more sleep.