Review: The American Book of The Dead 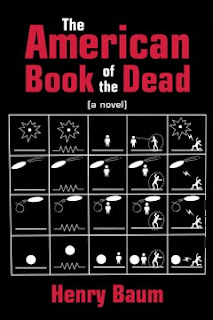 Don’t try to make any sense out that, by the end you will understand, but for now the first person narrator/author of the book is just letting you know that he basically wrote a premonition, not a novel. Now I certainly don’t mind a little Nostradamus, even if the narrator claims it’s merely Cliff’s Notes from the future, and after the “end is near” prologue, we move into a more traditional narrative and a more linear timeline. In chapter one our protagonist Professor Eugene Meyers, who teaches creative writing at the local University, inadvertently discovers that his teenage daughter seems to have taken an interest in making internet porn. And this really is the straw that broke the camel’s back. Our narrator is full on in the middle of his mid-life crisis and is having some difficulty dealing with the aftermath of youthful delusion. Blows to the ego like a stagnant writing career, a failing marriage, and the public domain sexual promiscuity of his only daughter are never taken lightly. But all this is just a device to introduce the reader to a viewpoint, one that will be vigorously challenged throughout the course of the book.

This book comes at the “end of the world” scenario from all kinds of different angles: war, terrorism, religious zealotry, vanity, greed, delusion, the death of innocence, and how TV is rotting our world ... etc.

The writing style has a stream of consciousness chop to it -- lots and lots of fragments: fragmented thoughts, philosophies, moralistic viewpoints, ideals, and our narrator is very self-centred, not in a arrogant way or a narcissistic way but in more of an introverted way: “I didn’t understand how other people’s lives worked without me,” he says. And as for the end of the world and the survivor society that would come after World War III, his thematic vision for his book validates his bleak yet optimistic way of thinking. As a juxtaposition to this way of thinking, we cut to the Whitehouse in order to jump into the mind of current lunatic President Charles Winchell, who is going to bring people back to their faith “even if it means killing them.” Initially this character sort of reminded me of Sheen’s character in King’s *The Dead Zone*. After we have been sufficiently frightened by Winchell’s cultist mentality, we then cut back again to Eugene doing a little detective work, trying to find the scumbag that filmed his daughter. He does, of course, and it doesn’t end well.

After Eugene is pummelled and subsequently released from the hospital, he finds that he is having visions, well, more like dreams, but in his dreams, he dreams of real people, complete with names and addresses. On the other side of the universe, President Winchell’s old man tells him that UFOs exist and that the “people from the other side” told him death isn’t an end. He is also under the impression that a mass holy war needs to come to fruition in order to save the world after the apocalypse. Yea, it’s a lot to take in with this book. Even looney tunes President Charles Winchell has doubts about his old man’s sanity, but I found the satirical stretch funny and alarming at the same time. Charles may be blinded by vanity and egomania, and Eugene may be prophetic in some way, but prophecy is really only a casual glance back over our shoulders. History divines the future; we are just too ignorant to pay attention to it. Much like in this book, we can travel through time to a different dimension and learn from our mistakes. As Eugene’s premonitions begin to come true via bombings that annihilate NYC and Washington D.C., he begins to seek out the people in his dreams. Good thing the dreams give him names and addresses, because Eugene feels an unnatural compulsion to find and collect these people and bring them together, even if the reason why isn’t clear to him just yet.

As for the set-up and the story, it was a little reminiscent of Stephen King’s *The Stand* sans the elaborate characterization and world detail, but then again, The Stand was over a thousand pages. Every single character was critical and had their own front story and back story and separate plotline with all plotlines affecting one another and eventually converging. This book is more concerned with the two divergent Points of View. This isn’t a plot-driven story, it’s an idea driven story, and much of it is in the form of Eugene’s treatise on religion and politics, genocide and the de-evolution/evolution of humanity, and zealotry in all its forms, so -- to the chagrin of the show don’t tell folks -- most of the book is in essay format. The two main characters are very well actualized, and again it reminded me of The Stand where Eugene is sort of Mother Abigail and Winchell is Randall Flagg. The minor characters are all incidental, even Eugene’s wife and daughter are dispensed with fairly early on and the thought of them lingers about as long as any interaction the reader had with them, everyone else is irrelevant as Eugene and Winchell get the most characterization in the book. This is in keeping with the narrator’s very self-centric view of his predicament.

The book explores a lot of Theological and Political theories with respect to the two conflicting views on Utopia and how to create it. We have the right-wing view through the biblical eye, but since Winchell is delusional and his father is a sociopath, the Bible is used rather haphazardly here to validate some really radical measures. For instance, President Winchell declares that he is the anti-Christ, believing that once revelations comes, he will be given the title and the power of Christ the King to rule over those who have survived the apocalypse. Basically, Winchell and his staff read into the Bible exactly what they want it to mean. But things don’t work out as he had envisioned or as quickly. He feels his faith challenged particularly by his father’s belief that a spiritual cleansing is necessary so that there is no religion in the world when the aliens finally make contact. Not to mention the war he helped orchestrate has left him high and dry. After all the bloodshed and destruction his war has left in its wake, he can’t help but feel cheated out of his personal battle between light and darkness. When he finally declares himself the second coming of Christ, the applause is a bit thin, his nemesis is AWOL, and all he is left with is his father’s slash and burn and the possibility that it all was a metaphor. Winchell hates metaphors.

On Eugene’s side of the fence, he is having an entirely different identity crisis. He doesn’t want people to see him as a savoir even if he did infiltrate their dreams and write the book published twenty years early that predicted the events they were currently witnessing. And the world, or what’s left of it, is witnessing some pretty freaky stuff including living creatures telekinetically birthed into the world from inanimate objects, UFO contact, multi-dimensional time travel, and a whole lot of really good lessons in the strength, faith, and the determination of humanity.

I noticed some fiddly editorial issues, but what was more problematic for me was that the barrage of fragments and chop and odd sentence structure, often seen with stream of consciousness styled writing, also often made the text difficult to read. There were points where if felt that the stylistic approach diminished some of the clarity. As for the ePub format, it had a few glitches of it’s own, specifically with the italics and some inconsistent spacing between chapters. On my little reader, there were huge gaps between the chapters.

All in all, I really enjoyed the book. I don’t normally go for dystopian or apocalyptic fiction, especially when it comes dangerously close to reality. But this book really touched on a broad range of ideas, and some of those ideas were very non-conventional. I really liked that. The alien thing almost had a Scientology taint to it: Satire of this sort definitely hits the hot buttons. Even so, it had a very open consciousness to it, and the point it was trying to make was driven home successfully: Humanity needs to evolve because even if you believe some higher power will come to save us, be it Aliens or God, it might just be too late. As for the story, this could have been an epic adventure, but instead the author decided in favour of a tighter focus by picking two diametrically opposed philosophies and slamming them into each other. Some readers might think it’s a bit thin on character and plot development, but like I said earlier in the review, this is not a plot driven adventure story. However, if you like *Naked Lunch* or *A Clockwork Orange* in style and theme, and you like the lengthy exploration of ideas, and you don't mind a bit of soap-box and politically cutting satire, then you will appreciate what this book offers for contemplation.

This book was purchased by the reviewer from Smashwords at a set your own price. I paid $3.99 for the copy and it was read in the .lrf and .epub format on a Sony ereader.
Posted by Cheryl Anne Gardner at 1:00 AM
Labels: 8.5/10, cheryl anne gardner, review

Thanks a lot for the review. I got a nice review yesterday where someone said I show don’t tell, so think it’s good that two people read the book differently. One quibble: Scientology? Yeesh – I know Xenu’s an alien story, but I find Scientology as demented and wrong-headed as President Winchell’s Christianity.

I wasn't saying you were advocating Scientology, I said it felt like a satirical jab at Scientology. Didn't even have to be that. It could have been any of the cult groups that think aliens built the pyramids and will come to save the worthy. That's why I made the connection initially. :) I was assuming Winchell's father was just as demented as his son. His son seemed to think so. I think you might have misread that part of the review. I did say I felt it was satirical. That was what you were doing, right? Even if the Aliens do come in the end.

Ah, yeah, didn't get you were pointing out that it was satire - mainly because it's not supposed to be, entirely. I'm a UFO "believer," or at least really love the subject, so while Dad Winchell (a Dick Cheney character) goes about establishing first contact all wrong, I do think it's possible and necessary...at some point.

Well, the way Winchell's father was depicted -- bat-shit crazy -- all his beliefs came across as farce. Black farce, but farce.

I am more of the Douglas Adams mindset. I believe life exists "out there" however, the only contact they are going to make with us is to remove us so they can build the intergalatic highway for the more evolved travelers. Or rather, they are smart enough to stay away from us.

If anyone's interested, this dialogue continues on my blog.