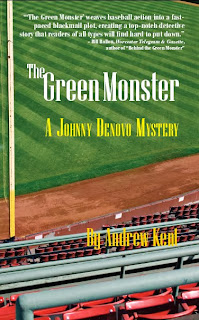 When I received the review copy for this book in the mail, I was initially disappointed and said, “Shit, I didn’t know it was a baseball book. I hate sports books.” Of course, it’s not a baseball book, and the cover really isn’t a good representation of the story or the genre, so don’t be put off as I initially was by the packaging. The ballpark is a pivotal setting, but the story has nothing to do with Baseball.

As the book begins, neuroscientist/detective John A. Novarro and his sidekick Tucker, the kilt-wearing intelligence expert, are at a baseball game when they are approached by bio-tech mogul McNaught. McNaught is being blackmailed over a rather interesting extra marital affair and wants to enlist alter ego Johnny Denovo in order to expose the blackmailer and prevent his dirty laundry from being aired in public. At this point, we move very quickly into the detective genre with a light, fun, good for all ages mystery, replete with corporate espionage, eco-terrorism, double agents, false identities, and a Chinaman that makes the best wonton soup for those rare occasions when you are infected with a particularly nasty weaponized virus. No, I respect the genre, and so this review was carefully written: you won't find any plot spoilers here.

In this, the second of the Denovo mysteries, we aren’t given too much background on Johnny, but we get just enough that reading the first mystery isn’t necessary to keep the reader in the loop. We know that John Novarro was once a brilliant neuroscientist and was extricated from his past and given a new identity as Johnny Denovo. In this second adventure, Johnny has made quite a name for himself and has an almost celebrity reputation. But what struck me as interesting about Denovo is his rather peculiar deductive technique in which he translates metaphors in order to solve his mysteries. I liked that angle a lot, definitely a new approach. Use of metaphors, especially in language, are often subconscious tells, revealing hidden personality traits and motivations, so while Denovo isn’t Spiderman, he does have almost inhuman depth perception.

In Detective Fiction, the rules of the game – codified in 1929 by Ronald Knox -- declare that a detective story "must have as its main interest the unravelling of a mystery; a mystery whose elements are clearly presented to the reader at an early stage in the proceedings, and whose nature is such as to arouse curiosity, a curiosity which is gratified at the end."

In this, Mr. Kent achieved what he set out to do. The Green Monster is a fast-paced plot driven detective story, so you won’t get much depth of character here. Most of the characters are your typical detective story stereotypes: the sexy dame who loves and assists the detective, the analytical sidekick who has a penchant for witty banter, and the Chinaman restaurant owner who is depicted a lot like Alfred Pennyworth. The book has a five & dime-store Dick flavour to it -- you know, the fast paced detective thrillers you loved as a kid and could buy at the corner store for some change. Well, you could when I was a kid -- and Denovo would make a great comic series. The plot has enough twists and turns to keep it interesting even if the eco-terrorism/biological Agent Orange angle has been done to death.

I reviewed this book from a hardcopy supplied to me by the author, and I noticed a few technical/editorial issues straight away. The proofing was decent enough: I only noticed a few typos, missing words, and extra words here and there. However, I found some serious and rather pervasive editorial issues, specifically: the superfluous, redundant, and often intrusive dialog tags and the over-zealous use of participle phrases -- usage that was a true detriment to the prose, often creating unnecessary chop and implausible action. I also noticed a bit of repetition in that I felt the case details were repeated so often that it slowed the pacing of the story substantially for me. That of course is subjective, I only need to be told things once, so individual reader mileage will vary.

Aside from those technicalities, this is a light good-fun sort of detective story with a clear message, definitely a G rating. I don’t recall a single expletive in the book, and the story is devoid of graphic content. Like I said, it would make a great comic. The plotting was smooth and logical, none of the events seemed overly implausible -- except the phone in the water thing -- and the characters, while we never really get to know them, played their parts as expected. The last detective story I read was Bukowski’s “Pulp” or rather his satirical homage to bad writing. I loved it, but the Green Monster is not that sort of story. In truth, I am a Marlow girl, and I tend to like a grittier more intimate approach to my detective stories. I also like a heavier does of psychology, and I like lush beautiful prose, so this wasn’t entirely my cup of tea. I have read several BackwordBooks authors, and judging by those offerings, I suppose I was expecting something with a harder edge to it. Even so, it was still an enjoyable read, and the subject matter was topical without being overbearing. While Denovo is no Sherlock Holmes or Phillip Marlow, he has a certain intellectual campiness about him that’s very agreeable, even if his egotism gets in the way and he doesn’t call for backup when he should. All in all, with some strategic editorial guidance, I see a bright future for Det. Denovo and Mr. Kent. Very bright indeed.

I’ll be giving this book away during one of our upcoming 2010 Free Book Fridays, so stay tuned.
Posted by Cheryl Anne Gardner at 1:00 AM
Labels: 7/10, cheryl anne gardner, review

I like the Red Sox but more than that, I love a great thriller...from your review, I'm not sure The Green Monster is one. But I'd like to take a chance and read it for myself. Will do that, if I win the free book. MAG