Review: From an Otherwise Comfortable Room 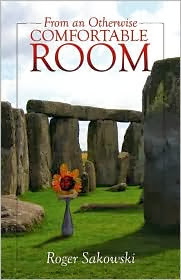 Mr. Sakowski, you are a master of subjective details, philosophical musing, and deconstruction. This thought provoking book of yours can only be described as a cross between Burrough’s Naked Lunch and Alice in Wonderland. Our main character Willie “Om” Omkowski being the Mad Hatter of a sorts.

The Blurb: When space bends and time has no meaning, the door is open to history, myths and magic. This is the world of William Homer Omkowski, Om to his friends, an old man who drinks too much. He tells a visitor about a loft party he attended in Baltimore thirty-some-odd years ago and the tragic event that overshadowed it. Prosaic and often hilarious, Omkowski’s memories are filled with poets, artists, Druids, oracles, witches, and a mysterious woman akin to the White Goddess of Robert Graves. It is the story of a man seeking to become a point of creation in neutral universe that is at once frightful and absurd, loving and heartless.

I would classify this book as experimental literature, a blend of narrative storytelling and philosophical musings. Part verse, part dysfunctional memory, and part hallucinogenic reflection, this is a book for people who like a challenging read and are inclined to non-linear thinking. I do and am, and so I enjoyed it immensely.

The story here, if you could call it one for lack of a conventional plot, is the disjointed recollection of a man’s life: part fact, part alcohol induced delusion. There is no rhyme or reason. Fiction blends seamlessly with legend, philosophical conundrums, historical truths, and the laboured breath of human existence – complete with radio static. As we begin our story, we are introduced to our drunkard of a narrator, William “Om” Omkowksi, as he, through his tall tale, attempts to connect the lines and the points of his own existence. From his childhood -- where he was the “lesser” son to an aspiring great writer -- to all night benders in Baltimore, to the Torry Bar and all its wonderland inhabitants, we can see William as clearly as he can see the Lady living within the stain on his wall. The segues are disordered, and the cast of characters is staggering. We have George the manic poet who strangles cats. “George paces the floor and knocks down Amphetamines, whites to keep the mind awake. He was an egg-shaped sort with the pointy end up, a short and roundly, a squat man who strutted with curious sideways wobbles. A noble egg after the Humpty Dumpty image precariously pitched on a high-strung nature” Tailspin the druid bard who was “a walleyed sort seething hopeful truisms too profuse for a single vision, so one eye turned east and other west”, and his pseudo-wife, Sybil the witch, “equally obese, hobbled on crutches with a fondness for sheets.” Amidst the chaos, we have Leopold and Lobe, April rain, Muidris the OCD junkie who accidentally commits suicide, and an evening long discussion on where one should, philosophically speaking, place a chair. Doesn’t seem to make sense, does it? But it does, if you have the patience.

This book covers the mutable and the immutable with dizzying clarity, clarity that “is” and yet is conflicted to the point of being a senseless blur. The Chicken and The Egg, Virgin Births, The Big Bang, and the implications of time: its creation, its order, and its bureaucracy. Everything is truth and everything is suspect. The mathematics of the universe lies hidden within the words. Poetry, tons and tons of poetry. “Step on a crack break your mother’s back. […] Even so the mist had sting to it when the wind picked up making it difficult to clearly see. […] What could be seen: dark and less dark feather-edged suggestions, trying, as they will, to retain their form. It would take some doing to keep momma from harm, bless her soul.”

But what struck me most about this book was the philosophy and the effortless expression of it through the subjective details. Every character was a metaphor and a mockery, and the satire at times was bludgeoning. This is not the world as we would know it, this is the world as William Omkowski sees it and lives it. “Fascism’s just intent on millenarian rebirth, you know, reverse civilization’s decline. Nazism is clearly an abuse of the term. Now how’s the end of it better for the world? Religions have been fascists for thousands of years. In fact, I bet everything I have, stash and all, that every man, woman, and child is a closet fascist just dying to reverse one decline or another and most likely in an abusive way.” Hilarious, meandering, and twisted. Every conjecture is something to ponder and ponder again. “A question is a nervous little thing on a comfortable lap.”

I noticed a few editorial missteps here and there, and the dialect in some areas might be problematic from some readers -- though once I got used to it, I enjoyed it -- but my biggest pet peeve with this work is the lack of proper comma usage. Mr. Sakowski seems to have a comma aversion, and with text as complex as this, strategic use of commas would have improved the read overall. Other than that, this book is exactly what it claims to be: A Creative and Adventurous Literary Journey. A journey that, at one turn, will have the reader perplexed and staring at the ceiling and at another will have the reader either shouting in agreement, shocked and awed, or laughing hysterically. I will leave you with some of Mr. Sakowski’s words from the chapter on Muirdris, and this pretty much sums up the book.

A Point has no width or height; no thickness for that matter. It simply can’t exist yet a line spans two of them. Strange, no? Worse are the lines between the more vicarious points such as times, friends, family, etc. These points vanish or die eventually and yet the lines persist, don’t they? Bewildering, no? I’m a wreckage of vicarious points.

Your review of my book was so much more than I expected. It’s a joy to have a critique grounded in insight and acumen. You did a better job summing up my work than me. As a passing note, you’ve also convinced me to reappraise my opinion of commas. Thank you for your honest review.

Thank you very much. It was my pleasure reading the book. Sorry it took so long, but the book warranted careful attention.

As for the comma issue. Beastly little things they are, and these days, under-used and under-appreciated. A well placed comma can make all the difference when it comes to clarity and mood.

Read it out loud, I say, as if you were acting in a play. Drama is the key to a comma. You'll know where to place them when you hear it.