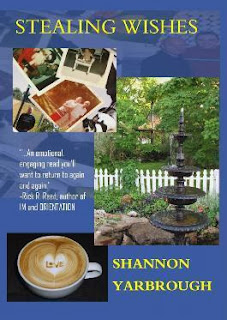 The Blurb: What's more important? A perfect cup of coffee or a perfect date? Blaine -- a photo taking, obsessive compulsive, coffee barista -- steals money out of fountains and can't find a date. Obsessed with the number 32, Blaine blames his lack in love as the reason for his habits. Everyday is timed and in sync to Blaine's magic number! When his friend Sallie sets him up on a date, Blaine is convinced that Edward, the new love interest, will cure his compulsions. But when Blaine discovers they have nothing in common, complications ensue. Auden, an artsy tattooed coworker, tells Blaine about a local photo contest, so Blaine sets out to capture a winning snapshot. Just as Blaine thinks he has his illness beat, his unvarying world spirals out of control when he skips part of his daily routine, ultimately making Blaine realize that Mr. Right has been in front of him the whole time. STEALING WISHES is a caffeinated romantic comedy with cream and sugar! Every reader will relate to Blaine's obsessive outlook on life.

I agree with the blurb. I liked Blaine instantly. Blaine, a self-proclaimed man of no opinion, a man searching for life’s great metaphor only to find a thousand clichéd similes, and his slapped by reality philosophy made me throw my hands in the air and want to be his fag-hag. I really do hate that term, but you get the point. I felt comfortable with him straight away and have probably uttered of few of the same words in my day. He is bit insecure and more than a bit obsessive, very melodramatic, and the narrative, just like Blaine’s mind, tends to meander off on irrelevant tangents. I found it quite amusing.

Now I don’t know much about the barista life -- I don’t visit coffee shops -- but I assume that any service industry job can be challenging, though I don’t agree that caffeine is the last legal drug, unless this book is science fiction of some sort, which it isn’t. But this is Blaine, and his logic can be exasperating at times, and I quote: “And that’s just coffee. I haven’t mentioned the mochas, lattes, cappuccinos, and macchiatos. When you add a shot of espresso to milk or water, a chemical reaction takes place creating a new Italian-sounding name that is somehow responsible for dividing customers into social classes.” Yes, Blaine has quite the disturbed logic about everything -- flamboyant and disturbed.

The narrative is relaxed first-person conversational style, which is mostly a telling style. I like story telling, and Blaine is eccentric, so who better to tell a story. I warmed up a cup of hot chocolate and settled in for a rather sentimental, albeit colourful, romance.

Blaine is a coffee shop barista and his boss and friend, Sallie -- self-proclaimed bi-sexual -- frequent the bar and nightclub scene. I have had many a gay man best friend in my day, so I could relate warmly to the bond Sallie and Blaine share: it was authentic. With the sexual tension removed, friends can just hang and be friends. Intimacy and depth abound here, and the friend-scapade evenings include some cliché gay nightclub references, but even Queer as Folk had Babylon, so I let it slide. The book is definitely not TV sit-com gay, and what I really liked about the story was the initial one of many metaphors. How a photograph compares to our rather unreliable memory. How even a photograph, a still image in time, can be just as subjective as the snapshot in our head. Nice angle, nice message, but the even nicer more romanticised message lies within the title; however, I won’t spoil it. For Blaine, for someone who needs routine and logic, for someone who needs a hard and fast record of history, this reality poses some issues. The camera recording every mistake you make in your life is not a nice thought, so there is a lot of inward reflection here, and I like that. I am a reader who likes internal action more than a suspenseful plot with shit blowing up. I like to feel humanity, and in Stealing Wishes, we get that, we more than get that. Blaine is honest, even when openly discussing his thoughts on his own sexuality. It’s the honesty that endears us to his character. He is just a man, a young man struggling with life, love, sex, and obsession, and when Sallie meets a man, things begin to unravel for Blaine.

“Maybe he likes frosting,” she says?
Maybe he likes kitchen knives and handcuffs. I couldn't fathom going on a date with someone without first asking for a resume, reference check, and a urine sample. Sure, I'd be willing to sleep with them without the urine sample first, but a date is a commitment.”

Blaine is a consummate people watcher, and a people creator, so we get a full cast of characters, from Auden, the punk-rock art graduate to every kook and duke-in-a-suit that could possibly wander into a coffee shop. Every stereotype is represented: bull-dykes to Horst the g-string German bartender. While the plotline is a common theme, you know where the story is going because Blaine isn’t subtle. His obsessive behaviour has infiltrated every aspect of his life from his daily routine to his hobby, from his pummelling narrative style to his relationships with others -- casual or intimate. When Blaine latches onto an idea, he goes full blown manic about it. Everyone and everything has to fit into Blaine’s world -- a world fabricated completely within his own head and divisible by the number 32, and if he can’t make it fit, jealousy, paranoia, resentment, and pining guilt ensue. The imaginary scenarios he creates are frightening and hysterical at the same time; and this is simply because Blaine’s sarcasm is snarky but not snarky enough to put you off. Sometimes, he is just so damn funny in a reality sucks sort of way you can’t help but giggle aloud. I giggled a lot.

“Is he cute?”
“Does it matter?” Sallie asked, paying the bill.
“Not yet.”
“He’s very cute. I think you will be pleasantly surprised.”
I think I’d be more surprised if he turned out to be a troll. I’d wonder what in the hell was Sallie thinking trying to set me up with some ugly guy like that. I don’t want to be surprised. I want to be elated.

And then this one...

“Test it out. Take my picture,” Edward said outside.
He straightened his shirt, checked his teeth in the rearview mirror of his car, and asked how his hair looked. I felt like a fool standing there while he primped. I laughed to myself with the thought of the camera breaking when I snapped his photo.
“Be sure to print a copy of that for me if it looks okay,” he said in the car as we drove away.
I’m sure it looked just fine. I’d left the lens cap on, purposely this time.

And then, sadly, here is the real reality of life for Blaine...

Few gay men see a one month anniversary, much less one week. One month is one year in gay years.

I noticed some minor formatting issues in the PDF download, and the fiddly editorial faux pas noticeably muddle the writing. I stumbled here and there, and there was a minor inconsistency or two, but it was nothing too egregious to ruin the story for me, and it’s nothing an objective editorial eye couldn’t clean up. My big issue is that I would have liked if the other characters had been fleshed out a bit more. They seemed a bit contrived because they were so thin, and I think Auden’s story could have been expanded a great deal. He was beautiful and interesting, but he seemed reduced to a catalyst. Like Blaine’s obsessive need to turn everything into a metaphor of some sort, he obsessively needed to “tell” the story: I understood that, but I, personally, would have liked more interaction, more backstory and more voice, from the other characters.

Other than that, the plotline plays out smoothly. Sallie sets Blaine up on a blind date, and we all know about blind dates. The agony of being with someone who is obviously not right for you is almost as unbearable as the loneliness, but this inevitably leads into the main character epiphany and the derailed but rather sentimental and bittersweet ending, which I will let Blaine explain: “Consequences. They can change everything, including what I’ve set up here for you as a no guess happy ending. I know. I know. I spoon fed you this cutesy lil romance story, and it’s probably not fair that I’m about to tell you how it all goes astray. I’m even warning you that it’s going to get off track. But I don’t like surprises. And remember. Obsessive compulsives don’t like change, especially when it fucks with their routine. So blame me.”

Overall, I was very impressed with the subliminal aspects of the story: the symbols, the metaphors, and especially the non-traditional ending. I just had a few issues with the delivery and that affected the score somewhat. Some structural editing and a bit more character development would have made this near perfect in the genre. If you are looking for a feel-good quirky romance, an eccentric yet insightful main character, some real life truths, and a good dose of sarcasm and existential rumination to boot, this story is for you. I would say it’s a gay man Reality Bites.