Review -- Finding The Moon in Sugar 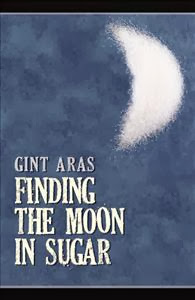 The Blurb: In this tragicomedy, Gint Aras’ hapless and marijuana-dazed narrator, Andrew Nowak, is seduced by a bombshell internet bride. The mysterious and wealthy Audra soon consumes the twenty year-old boy’s imagination, a welcome distraction from his needy mother and sister. Wild and hilarious adventures await Andy in Lithuania when he sells his possessions to follow Audra abroad. But he soon finds himself trapped penniless in her world of illness, regret and sex. Stumbling backwards into a romance he never sees coming, Andy must deal with Audra’s narcissism and grapple to understand her, a struggle that just might destroy him.

Andy, Andy, Andy ... yes, Andy is hapless, but the story is far from the “Gen Y” delusional drug addled male lit we are seeing so much of these days. This story is deeply textured, sentimental, tragic, and hilarious.

Andrew Nowak is an all-American reject: undereducated, a bit of a slacker, the product of a dysfunctional family, and self-proclaimed dirtbag. Andy isn’t even good at being a drug dealer. In his own words: He can’t even sell shit people want.

As our story begins, Andy is waiting in a local laundromat for a client when a very aggressive woman approaches him. This woman turns out to be the Lithuanian internet bride of said client. She promptly offers Andy one thousand dollars to service her -- orally. A hot woman, sex, and a thousand dollars, needless to say, Andy goes home with her. As the story progresses, we get an insider view into Andy’s lost and lonely heart and soul. Andy definitely has the Toa of Pooh. While Andy might be clumsy and accident prone, he is very much self-aware and very aware of the world around him. His simple-mindedness is that of innocence not arrogant stupidity, and that makes Andy very, very charming, much like the stray dog he befriends when he reaches Lithuania. Yes, Andy sells everything, buys a plane ticket, and chases Audra, the Lithuanian Internet Bride, to her homeland. At this point, the story veers off into the predictable stranger in a strange land plot device. We have a lot of wandering aimlessly; we have the wizard of Oz cast of characters, including Toto; and we have dive bars, discothèques, and drug parties, but in reality, this story isn’t about the cliché plotline. It’s really a study in desperation and co-dependence. Audra is mentally ill, and as it manifests itself, we don’t get a medical diagnosis or a laundry list of symptoms, we get to feel its effects very deeply through Andy. His simplistic, colourful, and almost childlike view of the world allows the emotion to stay raw and uncluttered. There are no justifications -- no analysis -- just Andy’s honesty. When Andy finds a picture Audra had drawn in his private journal, I got the chills. Actually, the book was full of insightful thrills, chills, a little romance, and enough twists and turns to keep the story entertaining from the first page to the last, which, by the way, is one of the most poignant parts to the story -- almost an Aesop’s Fable ending, if you will.

I got out my notebook to write down thoughts I was havin’ […]. Cauze I would think sometimes if I forget then maybe something didn’t happen. If you can’t remember clean how stuff happens, what’s the point of it happening?

Audra put love, a real important word where you can’t throw it around like wet pants, especially if you’re an English teacher and they make you study all the most hardcore words they got.

Inside some stairs was a huge Jesus, like three feet tall hanging on a cross. The statue got its legs rubbed for maybe two hundred years, so them feet didn’t even have no toes, all of them totally worn off.

Some of the stuff she (Audra) wanted is only supposed to be on the internet, like with a blindfold or straps.

That one real heavy suitcase […] was full of notebooks. Audra wrote English a lot. She drew real good, like professional, though lots of them drawings were perverted stuff or painful things...somebody cuttin’ a girl’s eye with a razor.

I brung my notebook and took it out of my backpack. And in there I seen a big surprise. Audra drew a picture. It was a girl peekin’ around a corner…only one eye and cheek and half a mouth was showin’. That girl looked kinda sneaky, like she was runnin’ away from somebody chasin’ her, though also she looked real curious. Underneath the picture Audra wrote, If you want to leave just tell me. I’ll get by on my own. I got this crazy buzz all over my body, totally like I got haunted. She let me know she read the whole notebook cause she underlined stuff I wrote on each page […]. Holy crap, it made me feel real ashamed. But also I got paranoid like somebody’s watchin’ me…someone spyin’ on me with binoculars.

Yes, the narrative is written in dialect. Andy is undereducated and his language skills are lacking. That, mixed with the slanguage, made me dizzy. I had to forcefully put away the formal grammar-girl in me in order to read this story. I don’t normally like dialect, but I am not opposed to it if done properly. Hell, I read Trainspotting and Naked Lunch, and in this case, Mr. Aras kept true to his character, which is all I ask for: authenticity. However, I didn’t like being called “dude” every five minutes; that got stale quickly. As far as the aesthetics, the cover art and title are spot on, beautifully done. I giggled a bit at the title because I know a few grandmas who did the same thing with their sugar bowls. The interior layout is above average: I noticed only one minor formatting issue, one most people won’t notice at all, and my only pet peeve about the writing itself, and this is minor, was with the reference dropping. We can assume that this book is going to appeal mainly to twenty and thirty something men of the male angst Gen X and Y variety. Yes, they would probably get the references, but I feel that reference dropping limits readership and also dates a story. Not to mention that if the reader doesn’t “get” the reference, they instantly disconnect. That is not a good thing. When a reader disconnects, you’ve lost them. This book isn’t, in my opinion, an intense social satire like American Psycho, which spoke to a very specific time period in American Cultural History. No, this is not that sort of book. This is also not one of those: Hey dude, I went here and did that, smoked this and fucked that ... and then I did it all again. No, it’s definitely not that sort of story, either. Thank goodness. This book is more of a psychological character study, a philosophical issue story if you will, and stripping away the irrelevant references would allow for a broader appeal that could span many generations and cultures.

Overall, I loved it. The story flows smoothly, the plotline is flawless, and the imagery is restrained and innocent in its beauty. The prose is tactile and at times even poetic. The main characters are painfully tragic, and so we can laugh, cry, be horrified and be mortally wounded all at the same time. Shakespeare would be proud. This goes in my top picks for the year so far. This is definitely my kind of literature. Those who like tragic black comedy will adore this book. Those who want psychological realism and those who want to look a little deeper into the psyche of deviant and damaged characters will love its masterful subtlety. Bravo! I can’t wait to read more from this author.