Thoughts on The Craft -- cannegardner 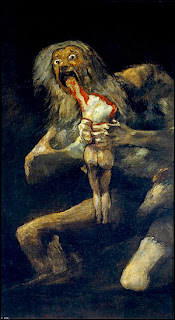 "The most serious problem Goya solved while mixing the paints for his tapestries was hitting upon the right dose of sugar; a dab more and they would have been good only for the tops of boxes of chocolates." -- Oliverio Girondo from "The Scarecrow and other Anomalies"

Again, this goes back to my earlier post on self-censorship versus letting the art speak for itself, sans the sugar coating. Goya, a court painter to the Spanish crown, was a master at sugar coating his sharp, satirical wit. His commissioned work was known for its disinclination to flatter, but he composed these pieces in such a way that any insult was not obvious. The Merry Festival tapestries Girondo speaks of were the portrayals of idyllic aristocratic daily life. He knew who he was painting for as he did much later during his "Black" painting period, where sugar was not the order of the day, and his subversive macabre view of the world was unabashedly laid bare, as seen in the painting: Saturn devouring his Son. Girondo, by comparison, was as equally gifted, and this is from the anti-preface by Karl August Kvitko, publisher of Xenos Books: "Girondo has a wicked penchant for cramming a phrase with multiple meanings: symbolic, satiric, ironic, lyrical,rhapsodic, paradoxical, and the absurd."

Isn't that what art is all about? Sure, we could write a story where every sentence could be taken literally, where the plot might be nothing but manifest destiny, a mere linear historical account. But why would we want to do that? Why, when we can take that very black and white snapshot of humanity and reveal its infinite mysteries, subtle as they might be ... so subtle, that if it weren't for art, they would and could very deliberately escape notice. Did Stoker write just a vampire story? Did deSade write just pornography? Did Kafka just write about a delusion man who thought he was a bug? I think not, and therein lies the measure of a good story: not only does it devour our innocence, but in the process, it restores our faith in it. This, I think, can be said of all art.

On a side note: Girondo self-published "The Scarecrow" in 1932 and sold it while parading through the streets of Buenos Aires in a mortuary coach, shouting his marketing madness through a megaphone. 5000 copies sold out in 15 days. My review of this title is on Amazon.

Girondo sounds like a spiritual ancestor of Crad Kilodney for his admirable DIY spirit. :D

I would agree. Girondo had that spirit, that brilliant eccentricity I love, and his quotes are hilarious, but his writing is beyond classification. His poem "Invitation to Vomit" pretty much says it all. Xenos Books was nice enough to include the original spanish text for all the poetry and stories. Well worth the read.