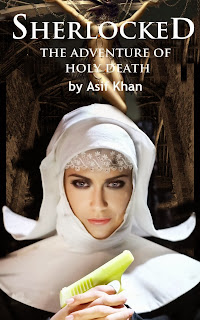 As suggested by the title, Sherlocked by Asif Khan is BBC Sherlock fan-fiction.  It includes the named mentioned of characters from the show including Sally Donovan. On the other hand Watson is shown as a practicing doctor, which is not the case in the BBC version.

There are serious issues throughout the story with grammar, punctuation, and tense. Also people are constantly thinking and speaking in exclamations (!). And the cover has nothing to do with the story at all, which is a tad disappointing.

Quite long sections take on unnecessarily detailed and technically correct form. I discovered that this is because they come straight from Wikipedia, for example: "The Bengal tiger's coat is yellow to light orange, with stripes ranging from dark brown to black; the belly and the interior parts of the limbs are white, and the tail is orange with black rings."

The mystery itself is competent but not especially clever, and the entire story takes only a few minutes to read.  So, given the poor technical quality and inappropriate fan-fiction elements I think I have to give this one 1/10.
Posted by veinglory at 6:04 PM
Labels: 1/10, Emily Veinglory, mystery, review