REVIEW: Singapore and the supernatural 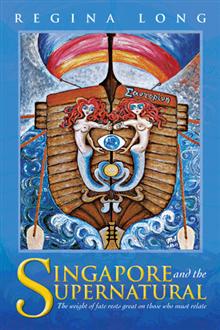 I first heard about Singapore and the Supernatural by Regina Long (iUniverse, Amazon) from a press release.  I immediately suspected I would not like the book. A supermodel gets magical powers and saves the world?  Oh, please.  But because I don't believe in making assumptions based on stereotypes, I decided to challenge my preconceptions and get a copy.

On the up side the story had an interesting setting and it is well enough written that you can tell what is going on.There are some repeated glitches like long info-dumps and incorrect word usage (e.g. crotch instead of crouch, calling large cats "canines"). But if that was a deal breaker I would have given up reviewing a long time ago.

The plot whirls around a lot but basically involved a young woman who starts seeing ghosts and eventually realizes she need to bury an old treasure to end a terrible curse on her family.

Unfortunately the main character is shallow and racist, an outlook that permeates a narrative where gays are "faggoty", Greeks are "greasy", and calling people racial epithets is apparently perfectly acceptable behavior.There is no doubt in my mind that the author wishes us to root for her heroine and her love interest despite their only obvious virtues being that she is beautiful and he is rich. Almost all of the characters are shrill, immature and frequently cruel.

I will not say too much to avoid spoilers but feel readers should be warned, if you consider rape an unforgivable crime you may want to avoid this book.

I gave half a point for the ability to write in comprehensible sentences. This was possibly a little sarcastic of me. But there is a small difference, I think, between those who write stuff I dislike a whole lot, and those who cannot write at all. I was trying to indicate that difference.