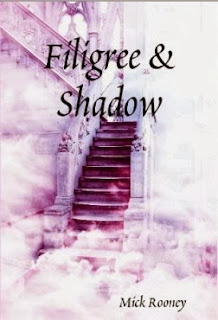 Filigree and Shadow is narrative poetry in chaos. At times, the cadence is choppy and didactic. At times, it’s repetitive, with shifting tenses that obliterate all time and space. Written in the “stream of consciousness” style, there is nothing to hold onto here but the shadow. The narrative voices are evocative of a dissociative fugue, and the distance is unfathomable. The writing is spare, the imagery equally so -- subtle, introspective -- and the blending of themes is quite seamless. For those who love abstract work bordering on the surreal, then this is a fine example: allusion mixes with and obscures the obviousness of reality here.

This book is more of a collection of musings than conventional stories -- the musings of ethereal souls who have cast themselves into the darkness so that they may make the journey to the light whilst missing nothing of its nuances along the way, ugly or beautiful. I did like this book, very very much. It’s a nice change of pace to be able to immerse yourself in experimental literature; although, I felt that the writing could use a bit of tightening up, a little selective editing and cutting. I felt the prose lacked a sense of urgency -- desperation -- and the deliberate repetitiveness in some cases was too repetitive. I didn’t get the influx of heart-wrenching drama that I normally like to see in this sort of work: The filigree was a little overpowering at the expense of the shadow. I was told of the pain, the sadness, the isolation, many times over, but I felt it wasn’t actualised as well as it could have been. Less Fact and more Allusion would have helped, for me, personally. I wanted more along the lines of the opening paragraph in Children on the Hill. “You were wearing torn and dirty clothes. No sign of your shoes.” Now that says it all without actually saying it. It allows us to feel the futility of death in the bare feet.

The sea swallowed me without a trace of mercy. Deep
into a world of dreams. Real dreams of sail and stillness.
Real dreams of uncharted worlds and words.
The very dreams which have pulled at the heart of
me, age upon age. Deep into those worlds and words
were bare thoughts emerge. For so long, they have
rested there; hidden away without being born, without
a glint of light, without mercy. These real dreams
have finally found the light. Born with stillness into
this world. You lived, you died. Your body was
washed up on the beach by the sea. You were wearing
torn and dirty clothes. No sign of your shoes. The
eyes, open, but empty. These dreams have haunted
me a thousand times before, in another world, in so
many other words.

Everyone will take away something a little different from each piece. For example, the first story, Arcadia, to me, had the feel of a creation story, the cataclysmic shifting of matter at the expense of space and time ... the creation of, not only a world, but the creation of the never-ending sphere of cosmic wonder that imbues a world with its majesty. A story such as that could only be told through the eyes of a creator: angel, divine mother, sister to the fates ... maid, mother, crone ... one and many. The other stories share similar thematic elements, as they should, because they are all beautifully and poignantly interconnected, though you won’t realise how until the end. Think The Silmarillian written as a cryptic meandering canto. This is definitely a spiritual think-piece: The reader will need to be fully engaged to appreciate it.

Literature of this sort is always an adventurous endeavour into the realm of allusion and not an easy endeavour to take on, so I have to give Mr. Rooney kudos for making a valiant effort here, especially with the very strategic use of the second-person narrative -- a constantly shifting second-person narrative, no less. Bravo! The editorial issues are noticeable -- a few structural issues, a few word missteps and typographical faux pas -- but not at all overly distracting. The interior formatting and presentation could also be a bit better. Other than that, I have little complaint. With a sharper focus on the allusion, I think this could be a masterpiece. Conceptually, it already is, and so I gave a higher score based on that. In order to rate the work, I had to compare it to something akin to its spirit and that would be the brilliant, uniquely genius “Maldoror” by Isadore Ducasse, writing as Lautreamont. Filigree and Shadow didn’t quite deliver the edginess, the Byzantine language, and the raw emotion I typically yearn for with this kind of work, but that’s just me. There are a few moments: A Time, That Time was my favourite, but alas, I need a bit more intensity, a little less dreamy romanticism, perhaps. The pages here are a veritable smorgasbord of misty mountains, mazy grottos, and ice-packed rivers in the midst of a spring thaw, metaphorically speaking, and though I love a good metaphor, I felt thrust into a bout of scenery overload. Even so, as a self-proclaimed curator and lifelong appreciator of experimental fiction, I am grateful for this, and it is definitely a promising start. With anticipation, I look forward to more from this Author. Maybe a slightly more scratching and clawing version of this. I tend to prefer my shadows a lot stronger willed and a bit dirtier in tint and texture. However, those who like a lot of filigree will like this.

Thanks for the review. Glad you enjoyed the journey!

Great review, Cheryl. Glad to see someone else's view on Mick's work. I loved F&S and I think it really is a masterpiece for him!

It was my pleasure, truly.