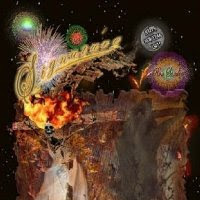 A Little Sci-Fi, a little Horror, and a Heck of a Good Time...

I do so love books that make you think, and yet again, Ron Sanders has created another of those intellectual literary chasms for thought.

Sci-Fi is not my normal genre, so I had a bit of difficulty early on with the situational slang and the science-speak. Those who are used to reading in the genre should have little trouble, although I thought some of the terms used such as ‘snatchers’ could have been defined earlier on to alleviate some confusion.

But as usual, Sander’s writing is engaging, and by chapter three I was sucked into his futuristic world.

It’s New Years Eve...and we are introduced to the cast of characters: Abe Joshua Lee, professor; Israel “Izzy” Weaver, psychoanalyst who has the verbally challenged lilt of a fifth grader; and Professor Moses Amantu. Yes, as in all Sander’s works I have read so far, the names are not selected randomly. These men, fondly called “The Group” are intellectuals of remarkable insight and talents, but this group won’t be having a mere night on the town for New Years Eve.

We have a lot going on in this story: Government intrigue and conspiracy, suppressed historical data, hard-wired memories, and ‘carriers’ – but carriers of what?

Suffering a minor medical incident and a few minor lapses of judgement, the group is detoured from their course and dumped into a wasteland at the edge of colonized civilization called the outs. And this is where the premise of the story hit home – the light switched on, and I was strapped in for the ride. This is intellectual Sci-Fi at its finest.

Suppose you could tap into the world’s history from ghosted electromagnetic remnants left behind – the true history of man. Now that is a frightening thought. This book is more or less Sci-fi, but the literary style lends itself to the overtly and completely uncensored political and religious leanings of the work – drawing parallels from his would-be futuristic world to the ebbs and flows of our own historical nightmares: Hitler, Stalin, Mussolini, Caligula … plagues, wars, genocide...the list goes on and on. What if our history is not actually reality – from the Bible to all our schoolhouse textbooks? The implications of this story are extremely disturbing; some might say radical even, but definitely worth the thought. What would a government do to conceal a truth? When one extremist side needs not to only dominate the other but also needs to obliterate it. How might that be done, what heinous possibilities are not only thought of but acted upon: an atom bomb, a plague, a heavy dose of hallucinogenic chemicals, or maybe even mass hypnosis.

Sander’s explores all the extreme possibilities of fanaticism and domination. Caverns of crazed religious maniacs, living in the darkness, breeding alongside the rats and other vermin, cannibalizing and torturing each other with sado-masochist pleasure, all to favour their god, and a government who will stop at nothing to keep them underground, I don’t know which was more frightening, the cannibals or the government agents.

This story is again edge of your seat action packed, and the ending, albeit slightly predictable, was no less thrilling. This is the second I have read from Sanders, and it certainly won’t be the last. The writing is stimulating, complex, the imagery vivid and gruesome, and the storyline is thought-provoking, surreal, and yet so based in reality it’s terrifying.

Reviewed by Cheryl Anne Gardner: Cheryl Anne Gardner, author of four novellas, is an Executive Assistant by day, an avid reader, and an independent reviewer with Podpeople.blogspot and Amazon where she blogs regularly on AmazonConnect. She is an advocate for independent film, music, and books, and when at all possible, prefers to read and review out of the mainstream Indie published works, foreign translations, and a bit of philosophy. She lives with her husband and two ferrets on the East Coast, USA.
Posted by veinglory at 6:53 PM
Labels: 8/10, cheryl anne gardner, review